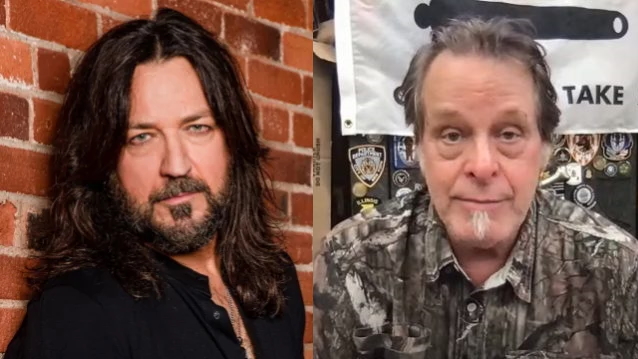 Last Friday (October 1),Nugent appeared on "Off The Record" where he once again said that he won't take the COVID-19 vaccine because the shots that are available in the United States were developed in less than a year are probably fake.

Asked what he would say to the people who believe it's a worthwhile vaccine and it's saving lives, Ted — who spoke openly about his battle with COVID-19 six months ago — said: "I appreciate the opportunity to speak to the people that went ahead and got the jab. I speak their language. I will speak to them thusly: Baaaaaah," he said, imitating a sheep. "Baaaaaah. Baaaaaah. Baaaaaah. They understand that."

After BLABBERMOUTH.NET published a story about Nugent's comments, Sweet took to social media to share a link to the article, and he included the following message: "Well, I'm vaccinated and for those of you who know me, I'm no 'sheep' ;-) I got vaccinated because I wanted to, NOT because someone told me to or convinced me to do it.

"I've said it before and I'll say it again - more middle ground folks. Stop with the far left and far right mentality," he continued. "There's right and wrong on both sides. There's ignorance and brilliance on both sides. There's also nothing wrong with people trying to do the right thing to make this world a safer place. That's honorable.

"How do you continue to have any fan base when you're calling the majority of them 'stupid'? Something that I'll never understand…"

More than 55% of the nation's population are currently fully vaccinated against the coronavirus, while more than 64% have received at least one shot, according to data from the CDC.

We’ll, I’m vaccinated and for those of you who know me, I’m no “sheep”;-) I got vaccinated because I wanted to, NOT...