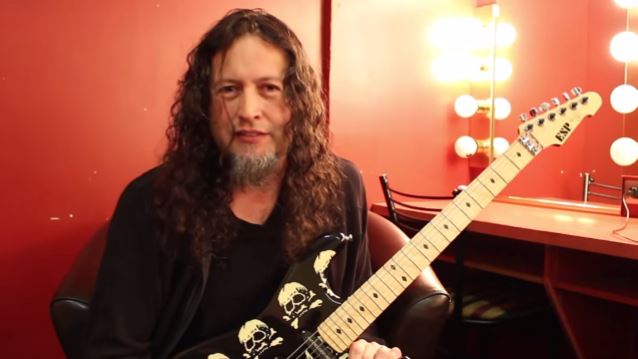 In a brand new interview with Free-Times.com, QUEENSRŸCHE guitarist Michael Wilton spoke the ill-fated band meeting in Brazil in April 2012 that ended in verbal and physical abuse between the group's then-vocalist Geoff Tate and the rest of QUEENSRŸCHE.

"People see you onstage having a fun time, but behind the scenes, everything has to be cohesive," Wilton said. "You have to be a brotherhood as well as shrewd businessmen and entertainers."

"It was a hundred percent totally and completely a rebirth of QUEENSRŸCHE," Wilton said of La Torre's addition to the lineup. "Todd's energy and his songwriting ability are a shot in the arm. He's a shot of adrenaline for the band. It's something that was needed in a stale situation. It's been four years since the change, and everything we wanted to do, all the goals that we set, we've completed them and we're moving straight ahead."

Wilton also talked about the fact that both Tate and the other members of the classic lineup of QUEENSRŸCHE were allowed to tour and make albums under the band name for about a two-year period after they split into two separate camps. The legal dispute was eventually settled, with Tate's band now performing under the name OPERATION: MINDCRIME.

"At that point, there was confusion in the trenches," Wilton told Free-Times.com. "For the layperson who doesn't really follow us that much, they see the symbol, our Tri-ryche, and they see the name QUEENSRŸCHE, and to them, that's enough. That kind of obliterated the confusion, though you still have bits and pieces of confusion. We're constantly dealing with that, but it's like debris after a war."

"It's [now] a democracy in the writing," Wilton said. "Everybody has the ability to write songs now and they all get worked on. They're not cherry picked. They all get worked on, to the point where everybody says, 'Okay, this one's good. This one, I don't know.' It's just a whole different scenario now."

Wilton also said that the renewed creative passion within the band is translating into QUEENSRŸCHE's live shows.

"It's just a whole different scenario now. Now, when we're playing live, the fans know we're giving it," he said. "We're out there performing, and it's a shame we have to prove ourselves every night. But you know what, if we prove ourselves one show at a time, so be it. We'll just keep doing it. And we've been doing that for the last two years and winning fans over."