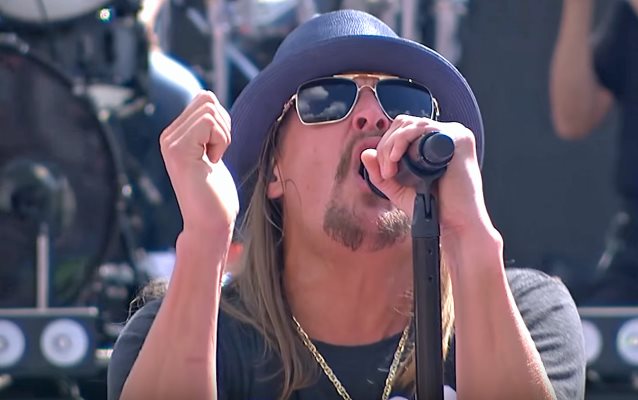 A Republican and Tea Party activist in Michigan suggested at the state party's convention over the weekend that Kid Rock would make a good candidate to try and win a Senate seat in 2018 currently held by Democrat Debbie Stabenow. According to The Pulse Of Radio, Wes Nakagiri — the activist and now a member of the party's central committee — said that Rock "has name I.D., is an out-of-the-box idea, and would kind of get rid of that stodgy Republican image."

Nakagiri pointed to Donald Trump's presidential campaign as a "template" for a Kid Rock run, saying, "I'll bet you he would generate as much excitement as Trump did."

Nakagiri's comments were picked up by local affiliates for ABC and CBS, while national politics publication Roll Call published the story with the headline "Kid Rock Eyed as Potential Senate Candidate."'

Although Rock was a vocal supporter of Trump in 2016, he actively worked in 2012 for the campaign of then-Republican presidential candidate Mitt Romney. Rock told The Pulse Of Radio after the campaign ended that he had no regrets about it. "It was a great experience," he said. "I learned a lot about just that whole poop show behind the political window. [Laughs] Never my intention to go out and preach politics to people. I always said during these rallies and stuff that I'd leave that to the pros. But it was pretty interesting overall. We had some fun doing it, man — a lot of it was just like paid rehearsals."

The singer has never expressed any interest in running for office himself, and his representatives have not responded to the stories about the possible Senate run, which seems like just wishful thinking on Nakagiri's part.

Rock is working on its eleventh studio album, which is due out later this year and will follow up 2015's "First Kiss".