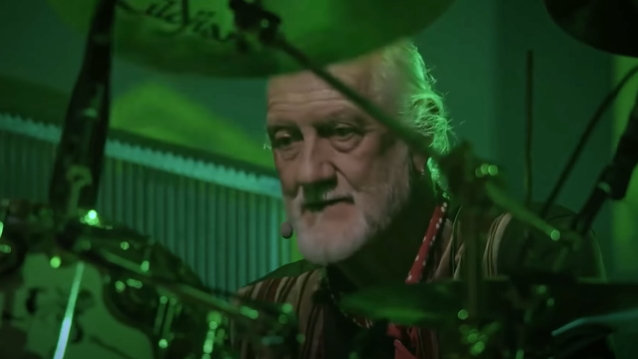 Mick Fleetwood spoke to Goldmine about how METALLICA's Kirk Hammett came to be involved with a very special February 2020 concert at the legendary Palladium in London celebrating the songs of Peter Green and the original incarnation of FLEETWOOD MAC.

"Kirk Hammett actually went out to see Peter twice during the rehearsal," Fleetwood, who curated the list of artists performing, said. "METALLICA connected with Peter's work ages ago. They would do 'Green Manalishi' in their live sets.

Asked how he first met Kirk, Mick said: "We were doing a charity gig [in Hawaii], and they came up to my house. And I'm shitting myself. What am I gonna do? You know, I play what I play. But any METALLICA song is like a machine, and if one thing is out of place, it doesn't work. So I said, 'I'll do my best.' I'd met Kirk before that in a funny little shop here on Maui. But I had never met James Hetfield, and he said to me, 'This is one of the greatest moments in my life. Do you know how much your band means to me?' It was so humbling. And so that night, Kirk was actually onstage playing on Peter's guitar. It was weird, but not weird. All these connective stories that are almost unbelievable, but that was why they were all on that stage."

The incredible one-off celebration was made available to watch on-demand in March then came out as a live album on April 30 via BMG.

In January 2020, Hammett posted a couple of photographs with Green, including one image where Peter could be seen holding a vinyl copy of METALLICA's "Master Of Puppets" album and another where they were both holding Green's legendary 1959 Les Paul guitar — known as "Greeny" — which Hammett now owns.

"It was coming up on 50 years since Peter Green left FLEETWOOD MAC, this tribute was happening, but no one called me until [photographer] Ross Halfin called Mick Fleetwood's manager and kind of informed him about my owning the guitar and suggested I should be part of it. So Mick Fleetwood got a hold of me at the beginning of the 'Hardwired…' tour and asked if I was interested in doing this tribute to Peter Green. At the time, I had to tell him I had no idea what my schedule was gonna be like with METALLICA because we were literally on the eve of our first shows for 'Hardwired…' But then three years passed and the tribute show started to develop more. Ross had kept me abreast on how it was taking shape, so I contacted Mick Fleetwood, and he was gracious enough to say I could still be part of it."

Green died last July at the age of 73.