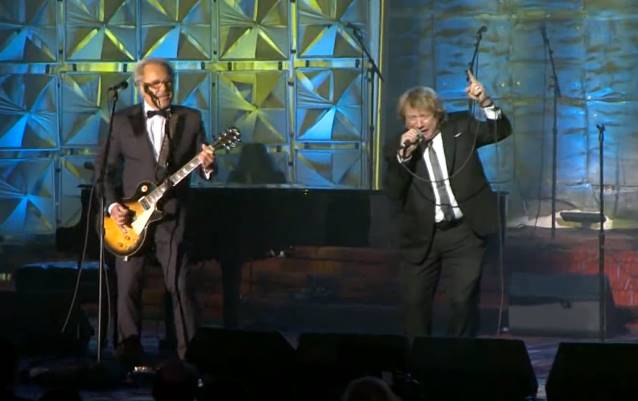 According to The Pulse Of Radio, Mick Jones revealed that the first new songs by him and co-founding FOREIGNER frontman Lou Gramm in 20 years might hit the public next year. The pair's June 2013 performance of "I Want To Know What Love Is" and "Juke Box Hero" at the Songwriters Hall Of Fame in New York City marked the first time the pair has performed together in a decade after Gramm left FOREIGNER for a second time.

Jones has rekindled a relationship with Gramm, and revealed to Classic Rock magazine, that the duo, who wrote most of FOREIGNER's classic hits together, might be teaming up one more time, explaining, "Lou told me a few weeks ago he's discovered a few songs we were writing in the '80s, but never quite finished. We might take time next year to bring a couple of those out of the vaults. . . It's a question of wading through them and finding a cassette machine to play them on."

When asked if a reunion — which would sideline current lead singer Kelly Hansen — would be unfair, Jones was quick to point out: "Kelly has dedicated everything to the band. He's phenomenal. So anything I do will be sensitive to that. If Lou and I do something, it'll be inclusive. No way will he replace Kelly.”

Jones was asked what shape a Lou Gramm / Kelly HansenFOREIGNER show might take, and he explained, "Something special where the old members can be involved. That would be cool. But nothing in the immediate future."

Mick Jones told The Pulse Of Radio that upon forming FOREIGNER in 1976, he knew that Lou Gramm would prove to be invaluable with a signature voice — with the songwriting chops to match. "I knew he had written, he was a writer too, and always felt that, y'know, it was important that the singer in any band had something to do with, [laughs] obviously, creating the songs, 'cause they're gonna sing them," he said. "Lou came up with some great titles; I think 'Head Games', I think 'Hot Blooded', too. And he developed into a really good writer."

FOREIGNER kicks off its joint tour with STYX and special guest, former EAGLES guitarist Don Felder, on May 14, in Wichita, Kansas at the Intrust Bank Arena.