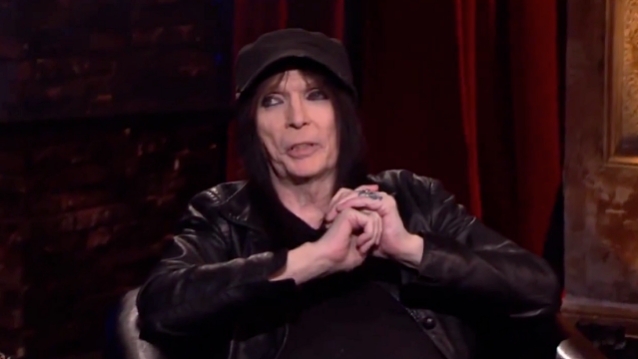 MICK MARS In 2014 Interview: If MÖTLEY CRÜE Reunites For A Tour, 'I Will Invite The World To Come For Free'

A newly unearthed video clip of Mick Mars's 2014 appearance on the now-defunct "That Metal Show" finds the MÖTLEY CRÜE guitarist discussing the possibility of band reuniting for more tours after the completion of its 2015 "final" trek. In the clip (see below),which was posted to Twitter by "That Metal Show" co-host Don Jamieson, Mars can be heard saying: "Let me put it this way: If that happens, I will invite the world to come for free."

"That Metal Show" co-host Eddie Trunk shared Jamieson's tweet and weighed in: "Wow! This is amazing ! What a fun episode this was with @mrmickmars @MotleyCrue ... but I totally forgot he said this.. until a caller reminded me today. well here's one tour that won't be expensive I guess #FreeTicketsToTheWorld thx to @ThatMetalShow !"

On Monday (November 18) — three years and 11 months after the band played its last show — CRÜE posted a video with Machine Gun Kelly, who portrayed Tommy Lee in the band's biopic "The Dirt", explaining that due to the band "becoming more popular than ever" and "gaining an entirely new legion of fans" in the four years they've been off the road, the band felt the need to blow up their previous contract in order to come out of retirement. That same day, Rolling Stone reported that MÖTLEY CRÜE will embark on a stadium tour with DEF LEPPARD and POISON in 2020. However, as of right now, no official announcement regarding the trek has been made.

Back in 2014, bassist Nikki Sixx told Rolling Stone that MÖTLEY CRÜE couldn't legally play again after the completion of the farewell tour. "The only loophole is if all four band members agreed to do it, we could override our own contract," he said. "But we know that will never happen. There are people in this band who will refuse to ever do it again, and you're talking to one of them. There is no amount of money that would ever make me do it again because I have such pride in how we’re ending it.

"If anybody ever — and I don't believe anybody ever would — would call any other bandmembers and say, 'Hey, it's been 10 years, let's just do 10 shows. A million a pop,' it could never happen unless all four bandmembers agreed," Sixx added. "And if we did agree, the way we've set it up — including this conversation right now — we'd have so much egg on our face. We have so much pride that that alone would stop it."

After the members of MÖTLEY CRÜE reunited last year to record four new songs for "The Dirt" film, some fans assumed that the group would be open to the idea of playing together again at a special event to promote the movie. But Sixx shot down the idea earlier this year, telling Rolling Stone: "Sometimes I look out at my friends, like the guys in AEROSMITH and METALLICA, and I'm, like, 'God damn it, did we retire too soon?' But there will be no one-offs in our future. Maybe we'll just get together and jam in [guitarist] Mick Mars's front room."

Wow! This is amazing ! What a fun episode this was with @mrmickmars@MotleyCrue ... but I totally forgot he said this.. until a caller reminded me today. well here’s one tour that won’t be expensive I guess #FreeTicketsToTheWorld thx to @ThatMetalShow ! https://t.co/HbjfKBDhjH