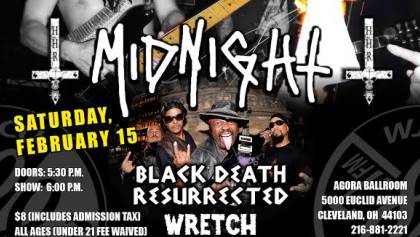 Cleveland, Ohio based speed/black metallers MIDNIGHT will headline WJCU's 2014 Radiothon Benefit Concert, set to take place tonight (Saturday, February 15) at the Agora Ballroom in Cleveland. Also on the bill are BLACK DEATH RESURRECTED, WRETCH, VENOMIN JAMES, VULGAR DEVILS and QUEEN OF HELL. Admission is $8. 100 percent of the door proceeds will be donated to WJCU.

A demented burst of first-wave black metal over 30 years too late but no less ripping and unholy, MIDNIGHT rapes your ears with a combination of sordid blasphemy and perverted glam metal. The band's sound has been compared to VENOM, HELLHAMMER and BATHORY rising out of the NWOBHM grave and shaking the cobwebs loose for another gloriously dirty, catchy spell of punky black metal.

MIDNIGHT has enjoyed international success in the metal underground. In addition to playing shows in the U.S., the band has toured Canada, Europe, Australia, Dubai, Mexico and Japan and released several internationally distributed albums, EPs and singles. The band does not play out too often in their hometown. Their forthcoming new album, "No Mercy For Mayhem", is scheduled for release later this year via Hells Headbangers Records. It's the long-awaited follow-up to MIDNIGHT's 2011 critically acclaimed "Satanic Royalty".

WJCU 88.7 FM is a non-profit, non-commercial community college radio station located on the campus of John Carroll University in University Heights, Ohio (an eastern suburb of Cleveland). The university funds approximately 40 percent of the station's operating budget. It is up to the staff to raise the rest from listener donations. For one week out of the year, the station sponsors a Radiothon fund drive requesting listeners to pledge their support. This year's Radiothon runs from February 8 to February 16. The goal is to raise $50,000. Donations can be made online at www.wjcu.org or by calling 216-397-4438.

The heavy metal benefit concert, which has become an annual event to coincide with the station's Radiothon week, was organized by WJCU "Metal On Metal" host and Auburn Records owner Bill Peters.

"Cleveland has the best college radio market in the world," says Peters. "We have four stations with powerful signals broadcasting a variety of programming you cannot hear on any of the commercial radio 24 hours a day, 7 days a week. The college stations work together supporting and promoting each other. It's a very cool scene we have here, unlike any other. My out-of-town friends always marvel at what they are able to listen to on the lower left end of the radio dial when they visit. We are incredibly fortunate and blessed." 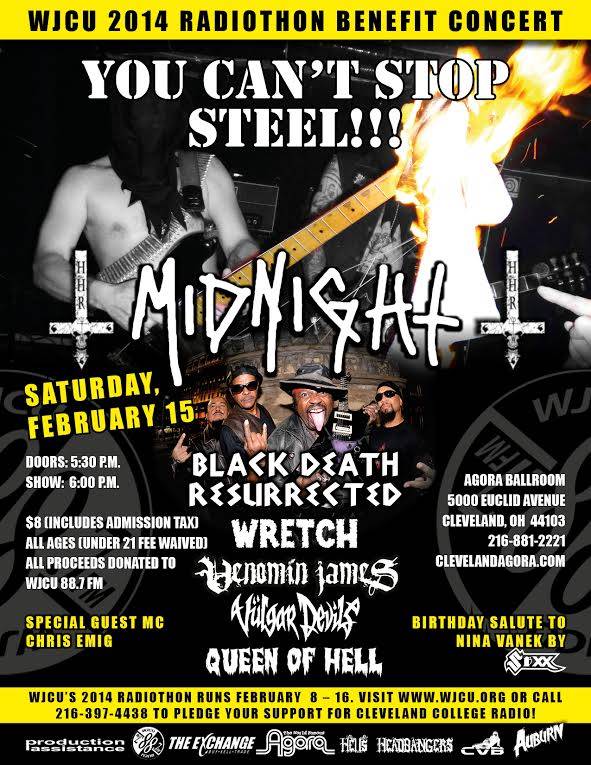