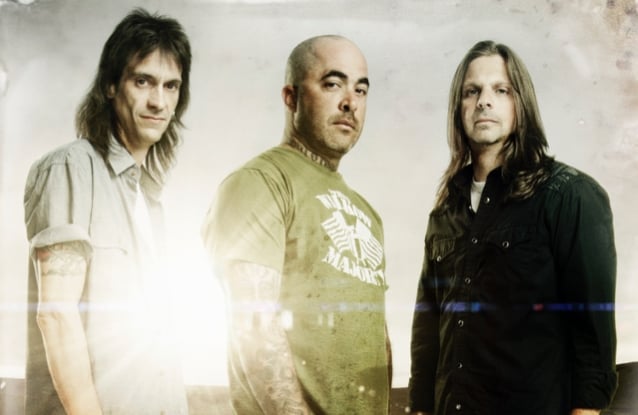 Massachusetts-based rockers STAIND will reunite for a few select dates this fall after a five-year hiatus. With more than 15 million albums sold worldwide, original members Aaron Lewis, Mike Mushok and Johnny April along with longtime drummer Sal Giancarelli, will play some select shows, including the Louder Than Life festival in Louisville, Kentucky in September and the Aftershock festival in Sacramento, California in October.

Asked by "Rock Talk With Mitch Lafon" in a new interview if the STAIND reunion dates will lead to further activity from the band in 2020, Mushok said (hear audio below): "That's a really good question, and one that I wanna know the answer to as well. For me, I think it's kind of like you dip your toe in the water and you see how it is. It's, like, 'Let's do these shows and let's see how it goes.' I think everybody's hoping that everything is good and we have a great time back out on stage playing these songs again, which I'm really looking forward to do. And hopefully there's more to come after that."

Mushok, who has spent the last four years recording and touring with ex-THREE DAYS GRACE vocalist Adam Gontier in SAINT ASONIA, added that he hasn't gone back into the STAIND mental space just yet. "We haven't really got there," he said. "The rehearsals start next month. But we do kind of have some songs kicking around, and it's time for me to start doing that. But for me, STAIND is what I've known for 25 years. I know that we had a break there, and I love what I do with Adam, and that's been great. But STAIND was a band that Aaron and I started back in '94, and there's just a long history there. I'm excited to be able to get back and play those [songs] and explore again and see where it goes."

Mushok recently told iRockRadio.com that STAIND was under no obligation to make an album at this stage of the band's career. "We don't have a label," he said. "It would be great to write some music. It doesn't have to be a full record at this point. We have a studio, and it would be easy to do. I think right now, it's, 'Let's get in a room together. Let's play together again. Let's do a couple of shows and see how it goes,' and kind of take it from there."

The last time STAIND performed was back in August 2017 at the "Aaron Lewis And Friends" benefit concert in Northampton, Massachusetts. The event saw three of the band's original members — Lewis, Mushok and April — playing a three-song acoustic finale with Giancarelli. It marked STAIND's first live appearance in three years.