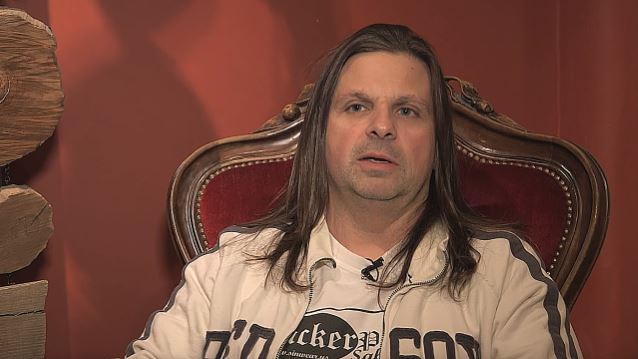 MIKE MUSHOK: There Is 'No Real Plan' For STAIND Recording Or Touring Again

STAIND has been mostly inactive since 2011 and guitarist Mike Mushok said in a new interview that the band is probably going to stay that way for the foreseeable future. Asked by Canadian journalist Mitch Lafon if STAIND's current hiatus is a permanent one, Mike — who has spent the last year touring with his new band SAINT ASONIA — responded (see video below): "I remember '09, we stopped touring, and we did a record after that. We did the self-titled 'Staind' record [in 2011], which we did a little touring on. It was one of my favorite STAIND records we had done. Aaron [Lewis, STAIND frontman], I know, has another country record coming out in September. So… You know, we say we're gonna do something else [with the band], but there's no real plan for it right now. I know he's pursuing [his solo career]. And I know we're [SAINT ASONIA] writing another record."

Pressed about whether it has been frustrating having to put STAIND on hold while Aaron continues to record and tour as a country solo artist, Mike said: "Honestly, it was a little frustrating, you know what I mean? But, listen… And people come to me [and say], 'Don't you get mad? Aren't you angry…?' And I'm, like, 'Well, I can't be. He has to be happy with what he wants to do.' And if [he's] not happy… No matter what I do, when I go to Aaron, I can't [say to him], 'Dude, we have all these offers. We've gotta play these shows.' I can't make him. And if I did make him, he'd resent me. And it wouldn't be fun, and it wouldn't be what they're supposed to be. So when the day comes that he decides, 'Hey, man, let's do this again,' either I'll be ready or I won't. It's either, 'No, man, I'm doing this [SAINT ASONIA] now, because you had your thing,' or we'll be on a break, or whatever it is, and I'll say, 'Okay, we can do it.' So I'm really just kind of playing it as it goes."

Lewis told The Pulse Of Radio recently that he's not really sure what the future holds for STAIND. "I mean, I don't know," he said. "We survived our record contract, and we put out eight records. Do I think that there's more music there? Sure. Do I want to go down that road? Not particularly at this moment, no."

The singer made his debut as a country artist with the 2010 EP "Town Line", which he followed up in 2012 with his first full-length solo album, "The Road".

SAINT ASONIA is currently in the early stages of writing its sophomore effort.