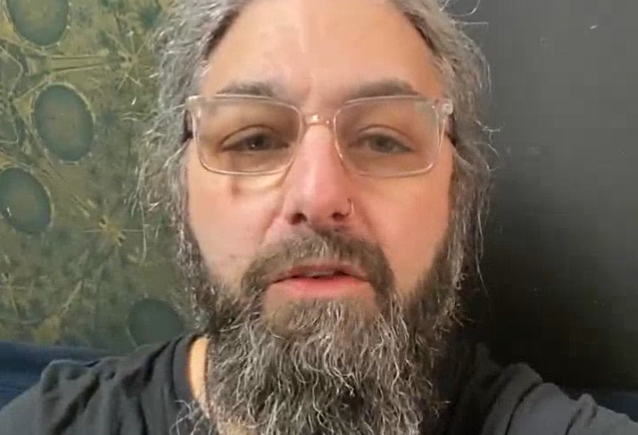 According to DREAM THEATER fans who attended last night's show, singer James LaBrie gave Portnoy a shoutout from the stage and Mike waved. Several fans also took pictures of Portnoy at the venue, with Mike and his wife reportedly watching the performance from near the Beacon Theatre soundboard.

Earlier today, Portnoy shared a few backstage photos from last night's concert and he included the following message: "After 36 years, I finally got to see my 1st DREAM THEATER show last night! It was a wonderful evening and it was such a pleasure to spend time with my old friends again".

Current DREAM THEATER drummer Mike Mangini shared a backstage picture of him with Portnoy and he wrote: "What a great moment. And as usual, we had fun catching up."

Portnoy was a guest on DREAM THEATER guitarist John Petrucci's second solo album, "Terminal Velocity", which was released in August 2020 via Sound Mind Music/The Orchard. The effort marked the first time Petrucci and Portnoy recorded together in over a decade, as well as their first time playing together since Portnoy departed DREAM THEATER. John later shot down speculation among DREAM THEATER fans that it's only a matter of time before Portnoy returns to the band, telling Spain's Metal Hammer: "I think it's really important for everybody's sake — for fans to understand this. I think it's important, out of respect for both drummers — for Mike Mangini and Mike Portnoy — that there's no misconstrued thing: 'Oh, this means something else.' This is [Portnoy] playing on my solo album, which is a really happy moment for me… I don't want people to get the wrong idea. I don't wanna create any drama or weirdness, because it's all positive. I made a solo album — finally, after 15 years — and I got my friend to play drums on it, who I haven't played with in 10 years. So that's the vibe."

LaBrie discussed his relationship with Portnoy in a November 2021 interview with Radio Forrest. He said at the time: "I haven't spoken to Mike, to be quite honest, since he left the band. So I think that pretty much says it all."