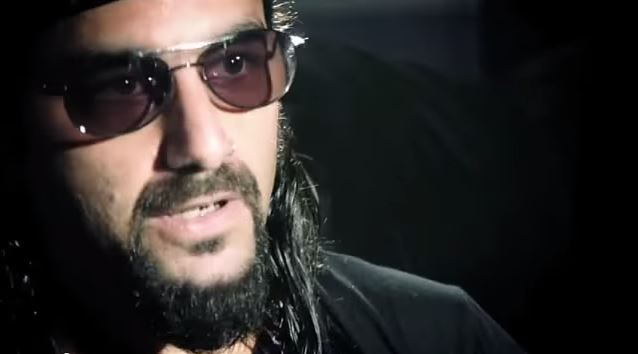 MIKE PORTNOY Has No Regrets About Leaving DREAM THEATER

In a brand new interview with Rocksverige.se, drummer Mike Portnoy (THE WINERY DOGS, DREAM THEATER, AVENGED SEVENFOLD, ADRENALINE MOB) was asked if he had any regrets in his life, personal or musical. "I don't think I do," Mike replied. "I think there's a difference between regret and… Let me rephrase that. I actually have a tattoo on me that says 'no regrets,' and I actually try to live by that.

"There's a lot of things in my life that I've learned from and, ultimately, I don't regret them, because they got me to where I am right now.

"There's a quote that I love and I kind of used it in the song 'Repentance' and it's 'It's better to regret something you've done, than something you haven't done,' and I absolutely love that.

"I'm not gonna use the DREAM THEATER example because I can already see the headlines, so I won't say it. [Laughs] I'll paraphrase like this: when I came to that crossroad four years ago, if I hadn't made the decisions I had, I probably would've spent the rest of my life wondering, what if? What if I left the band?

"I think it's better to follow your heart and take the risk than wonder what could've been."

Portnoy, who co-founded DREAM THEATER more than 27 years ago, abruptly quit the band in September 2010 while on tour with AVENGED SEVENFOLD. He has since been replaced by Mike Mangini (ANNIHILATOR, EXTREME, JAMES LABRIE, STEVE VAI). Portnoy revealed that he tried to rejoin DREAM THEATER months later, and was rebuffed.

In the latest issue of U.K.'s Metal Hammer magazine, Portnoy was asked by TESSERACT's Jay Postones what the chances are of Portnoy ever playing with DREAM THEATER again.

"If I was a betting man, I wouldn't put money on it," Portnoy replied. "And that's not my doing. I never say never and haven't closed any doors.

"I'm a very nostalgic person; I forgive and forget very easily… but I think the guys [in DREAM THEATER] have made it very clear they have no interest in looking backwards.

"Those guys were a huge part of my life for a very long time, so I'm open to anything, anytime.

"I guess the ball's in their court. We shall see."

In an October 2013 interview with Brazil's "Wikimetal", DREAM THEATER singer James LaBrie stated about his current relationship with Mike Portnoy: "I haven't spoken to Mike since he left the band.

"Myself, personally, and the way that the band feels is we're moving forward. Mike Mangini is our drummer and he will remain our drummer until the day that we're finished doing this. It's just the way that it is.

"The reason that DREAM THEATER is moving on is because we have somebody that completely clicks with the band, he understands the band and he's helping us fulfill our musical aspirations.

"Mike [Portnoy], you know, he's moved on, he's working with musicians and doing the things that he wants to do musically, and I think he's happy with that. But as far as DREAM THEATER [is concerned], this is who we are and this is who we will continue to be. Mike Mangini is our drummer, and he will be."

.@JhiaxusPrime@BLABBERMOUTHNET I DONT BRING IT UP! The Journalists do!! When THEY stop asking, I will stop answering...I look forward to it