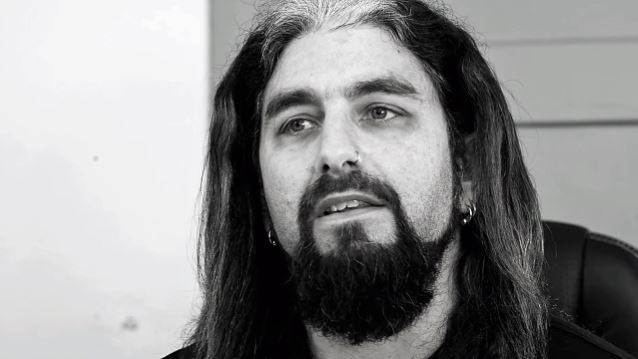 MIKE PORTNOY: 'I May Have To Cut Back On Social Media For My Own Sanity'

Drumtalk, the video podcast by German drummer and videographer Philipp Koch, recently conducted an interview with former DREAM THEATER and current THE WINERY DOGS and METAL ALLEGIANCE drummer Mike Portnoy. You can now watch the chat below. A couple of excerpts follow (transcribed by BLABBERMOUTH.NET).

Portnoy: "I've always embraced the spotlight. I'm a ham. I like the attention, so I'm a loudmouth, I'm an extroverted personality, so I've always tried to use it to my advantage, being the spokesperson for my old band. When social media came around, I embraced it; I kept in touch with the fans and always posted things. So that's a good side; with fame comes that. But with fame also comes the fact that you become a bit of a punching bag for the critics, and for the people on the Internet and the social media that want to have their say. I can say the smallest thing and the smallest opinion that millions of other people on my web site would say the same thing and nobody would bat an eye. But if I say it, suddenly it's like a shitstorm and all hell breaks loose. I can't complain. I realize I have a million and a half people on my Facebook page, so, yeah, that's great and it's an honor and it's really a blessing that I have that. But with that comes a responsibility that I need to watch what I say, and I don't always do that — just because I like to have an open, honest relationship with my fans. But you can only get beat up so many times. And I realize for every one angry, mean post from a fan, there's another nine supportive, loving ones. But still, yeah, it hurts. I'm human. My skin is only so thin, or so thick. They'll bash me today and then tomorrow they're on to Dave Mustane or Geoff Tate or Lars Ulrich, or whatever, but still, it stings. And yeah, those things hurt. That first year after I left DREAM THEATER, all of the drama on the Internet made me crazy; it made me a miserable person. And I finally had to say, 'Okay, I have to stop following all these web sites and people that have to do with DREAM THEATER, 'cause it only… it creates drama in my life and upsets me. I had an incident at a show in Southeast Asia a few years ago, and, of course, it was captured on YouTube and it spread like wildfire and all hell broke loose. Yeah, before the Internet — and I'm not complaining about the Internet, 'cause it's a great, great tool — but back in the '90s and the '80s, we didn't that; we didn't have problems like this. I wouldn't have to spend half my day buried in my phone's… looking at my phonescreen and obsessing over that stuff. I think I'm coming to a crossroads now where I'm thinking I may have to cut back on social media for my own sanity. And it's a shame. It's a shame, because it's always been a very good relationship with the people that are understanding."

On how he chooses which projects to get involved with:

Portnoy: "I've done other tours with other bands that will remain nameless [with] people walking around all day miserable, cranky, complaining, not happy about being on the road, nothing is ever good enough, and that kind of stuff just brings you down, and you start fighting and bickering and there's always drama. I've learned in my career that now I'm at a place where I don't need to do music for money, I don't need to do music for… I mean, I do need to do it for creative satisfaction, 'cause that's why I do it, but I can pick and choose the bands and the projects I work with, and if something is not working and if there's a lot of negativity, or if it's just not fun, I don't need it in my life. I mean, I hate to say it, but I left a band that had success and had everything going for it that I could have rode off into the sunset for the rest of my life. But I made the change because I needed to be internally happy. And here I am playing much smaller clubs, and, for the last four or five years, I've been playing places like this that are very, very small. But it's more important to be happy, emotionally, but also happy creatively, and be satisfied with the music you're playing. So I'm happy to say I'm at a stage now where I could really pick and choose things I wanna do based on enjoying it and the people I do it with. It's a nice balance between the people you work with and the music you make. I think those two things are the most important things in a band. It's way more important than your personal technique. You need to love the music you're playing and you need to enjoy the people you're making it with."