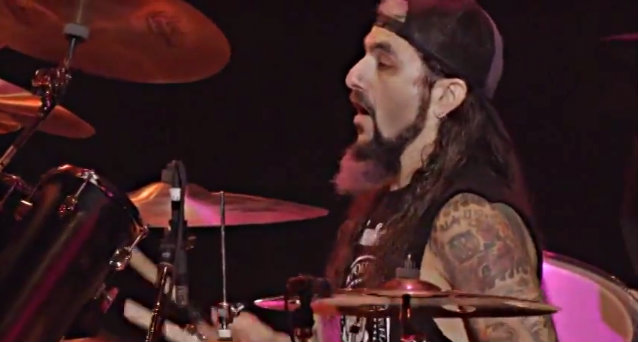 Drummer Mike Portnoy (THE WINERY DOGS, DREAM THEATER, AVENGED SEVENFOLD) recently spoke to U.K.'s Rhythm magazine about his drum solo heroes, why he switched from busting chops to entertainment, and why he has moved on despite the pressure from fans and bandmates alike who want him to steal the spotlight one more time. A couple of excerpts from the chat follow below.

Rhythm: What were the drum solos that first inspired you?

Portnoy: When I was a kid, John Bonham's "Moby Dick" solo was the first time I'd ever heard a drummer just go off for fifteen minutes, and he did the whole thing of playing with his hands which was pretty cool.

In the late '70s, I was a big KISS fan. Hearing Peter Criss do his big solo on KISS "Alive", on the song "100,000 Years", that was one of the first drum solos I ever learned note for note and actually knew as a musical piece.

The next big one for me was when I discovered Neil Peart and RUSH. One of the things that blew my mind about RUSH was the drum solo. It was a centrepiece for their concert. The first time I saw him do one in person, it was one of the only times I've ever seen the whole audience with all eyes on the stage.

If I had to list one more, it would be Tommy Lee. With him it was never about the technical chops — he took it as far as it could go as entertainment. On the latest MÖTLEY CRÜE tour, they had a rollercoaster on stage. That's taking it to a whole other level visually.

Rhythm: Do you feel any pressure from fans to have a solo spot?

Portnoy: Yeah, I get that not only from the fans but I get it from a lot of my bandmates. There have been a lot of bands I've played in where the guys go, "Oh man, you've got to do a drum solo!" And it's like, "Ah, I don't know. I'd rather do a song in that five minutes."

I'm not interested in drum solos anymore. This is my personal taste as a listener and as a player. I think I've grown out of it. Maybe that will change. Most musicians go through changes and phases, so that's just where I'm at in this particular moment.