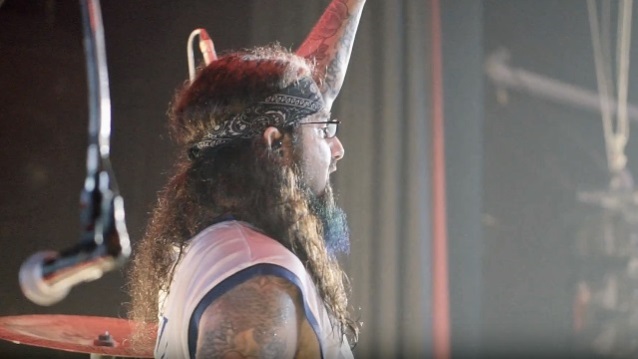 MIKE PORTNOY On SHATTERED FORTRESS Tour: 'It Is Very Possible I'll Never Play Some Of These Songs Ever Again'

Mike Portnoy has posted a video recap of the just-completed SHATTERED FORTRESS tour during which he performed DREAM THEATER's "12 Step Suite" in its entirety for the first time ever. The music documents the drummer's battle with alcoholism, and is an ensemble of five songs recorded by DREAM THEATER from 2002 to 2009, with titles that reflect his struggles: "The Glass Prison", "This Dying Soul", "The Root Of All Evil", "Repentance" and "The Shattered Fortress". Check out the footage below.

"This whole tour has been such an emotional experience performing these songs one last time in each city, but Saturday night was really 'the end.' It's not lost on me that it is very possible (in fact, I'd predict very likely) I'll never play some, if not all, of these songs ever again.

"Yes, in some ways, that's very sad, but in a more optimistic way, that's what's made this tour so awesome and special. We all got some closure on the whole MP/DT thing. I was able to play these songs for you all one last time (especially the '12 Step Suite') and finally get it out of my system once and for all.

"I must thank Eric, Charlie, Richard, Diego, Conner and Ross for absolutely nailing this music each and every show...not only delivering it with perfect precision, but also passion and energy... you guys rule!

"While I do indeed look to what lies ahead in the future for me (SONS OF APOLLO, FLYING COLORS, NEAL MORSE BAND, METAL ALLEGIANCE, TRANSATLANTIC, THE WINERY DOGS and who knows what else may come my way),it was great celebrating my 50th birthday with you all and revisiting this music again."

Portnoy said that it was always part of his master plan to perform "12 Step Suite" in its entirety live on stage with DREAM THEATER. However, his 2010 exit from the band made that impossible, until now.

"I would love nothing more than to perform it with [DREAM THEATER]," he told The National Student. "But they've made it clear that they have no intention in reuniting at any point. So, life is short; this [was] my 50th birthday and it just felt like the right time and place to finally play this music."

He continued: "I wrote all five of these songs with the intention of them being performed from start to finish, and I would have loved nothing more than to be doing it with DREAM THEATER. But it's obviously not on the cards for them. I can't sit around waiting for a reunion that may not happen."