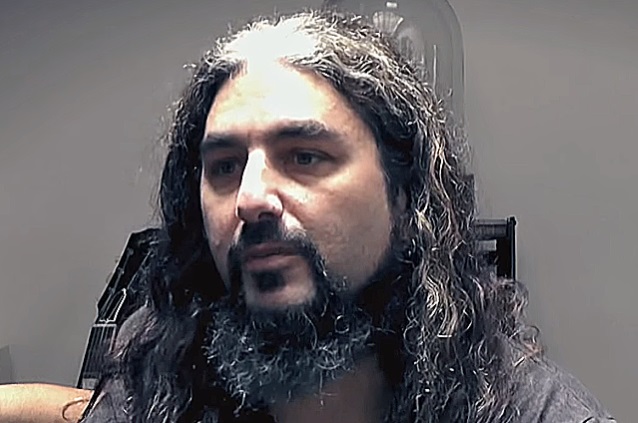 MIKE PORTNOY On SONS OF APOLLO: 'Basically, This Was My Dream Lineup'

On why the time is now for SONS OF APOLLO:

Derek: "Mike called me and said, 'Let's do it.' We reunited with PSMS [the instrumental band featuring Portnoy, Sherinian, Sheehan and guitarist Tony MacAlpine] in 2012. Mike and I have always had a chemistry and [when] we played together again, to me, it was very obvious. Like, 'Come on, dude. Let's fucking do this and take over the world.' He was involved with many other bands, I was doing BLACK COUNTRY COMMUNION, we had different things, but then Mike called me last year and toward the end of the year and said, 'Are you ready to do this?' I said, 'Let's go.' From that point on, I just went into the studio and started writing my ass off every day, putting stuff on tape and sending it to Mike. Then Mike got Bumblefoot in, Billy Sheehan we had played with, so we had a relationship. Then Mike wanted Jeff Scott Soto and it all just came together."

On SONS OF APOLLO's lineup:

Mike: "Basically, this was my dream lineup. My dream lineup instrumentally was PSMS, I was the one who chose that lineup as well. I knew that was for progressive metal, kind of jazz fusion instrumental. I thought that was the best lineup for that. Once we had that PSMS experience, Derek was, like, 'Hey, we should turn this into a full-time band.' The timing just wasn't right. Now that the timing was right, we took PSMS as a kind of a blueprint, but we knew we needed a more hard rock, heavy metal guitar god and a singer. Bumblefoot and Jeff Scott Soto were to me, the guys. I pictured in my head, what is the dream lineup for a progressive metal, hard rock, supergroup? This was it."

On the songwriting process in SONS OF APOLLO:

Derek: "I would do sketches in my studio. I would keep sending them to Mike, and Ron was sending in sketches, too. Mike pretty much cherry-picked the ideas he liked the best. Those were the starting points in the studio."

Mike: "Same with Ron. Bumblefoot was sending riffs, too. There was a stockpile of riffs between Derek and Bumblefoot. We got together, mainly Derek, myself and Bumblefoot. Once we started putting the ideas together, then we would explore and expand upon them."

On whether Soto brought in his own vocal lines and melodies:

Derek: "Absolutely not. Mike and I were very instrumental in the vocals as far as the lyrics and the melody lines. We wanted to make sure that there was none of the cheesy elements that are in most progressive rock bands. The high vocals [mimics vocals] or the low [vocals], or the fake anger, like acting like you're upset but you're not. There's none of that shit. It's fucking straight-up rock and roll vocals. That's what separates SONS OF APOLLO from the rest of the pack. We're a rock band with sick-ass chops with octopus pedigree."

On the band's forthcoming tour plans:

Mike: "The tour will start February in America. Then we're putting all the pieces to the puzzle together now, so it's safe to say, definitely by next summer we'll be in Europe. Hopefully sooner, but definitely by next summer. I hope to play some of the festivals and take part in all of that. Then, I will anticipate that we will absolutely be through Europe at least twice in 2018. At least one festival run, then one other run. We'll be through a few times next year."

SONS OF APOLLO's debut album, "Psychotic Symphony", was released October 20 by InsideOut Music. It sold around 5,200 copies in the United States in its first week of release, earning the band the top position on Billboard's Heatseekers chart, which focuses on top-selling albums by new or developing acts, defined as those who have never appeared on the top 100 of the Billboard 200.