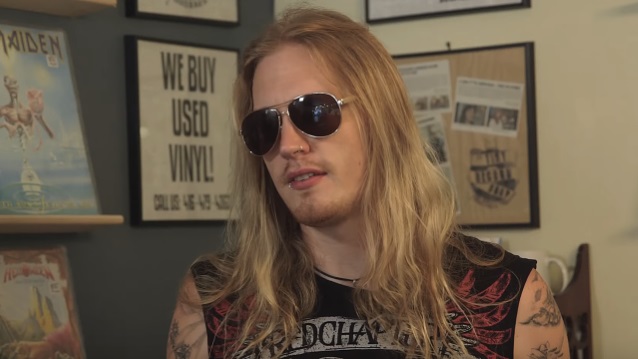 MARC HUDSON On Role In DRAGONFORCE: 'I Try And Bring A Little Bit Of English Charm Into The Whole Thing'

Marc: "I was singing in a band. We did original songs, just some stuff we'd been writing and stuff. Basically, at some point, the guitar player from CLINT [Hudson's former band], said, 'I just seen it on the Internet, DRAGONFORCE are looking for a new vocalist. You should try out.' Honestly, I thought I had no chance, it's not going to happen. I think I had nothing to do for a week; I had a week off. I thought I was going to do it for a joke, almost, see how it goes. I recorded 'Through The Fire And Flames' and put it online and people were commenting, saying it was really cool. Literally, the day after I sent it, I got a message from Herman [Li, guitar] direct to my e-mail address and it said, 'This is really cool. It sounds a bit like Michael Kiske from HELLOWEEN,' who is my favorite singer. I said, 'Wow, that's awesome!' He actually replied to me directly. Then he came down to Reading, which is near Oxford. They watched me play with that band, CLINT. That was basically it. They said, 'If you want the job, it's yours.' I thought 'I'll have to quit my actual job.' So, next thing you know, I did, basically. I quit my job and went away with those guys."

On the learning curve he faced upon joining DRAGONFORCE:

Marc: "Yeah, there's loads. It's not only just the kind of the daily things, being on a tour bus and stuff, I'd never done that before, I was never used to playing show after show after show, it'd always be like 'We have one show on Friday. The next one is in August.' Also being able to sing for the length of the set that they deliver. Before, I was singing forty minutes. Now, I need to sing for an hour and forty minutes and the songs are way harder. I had to adapt to that."

On whether he had aspirations of pursuing music full-time:

Marc: "I would like to say that's what I was gearing toward because it makes for a better story, but genuinely, I wasn't, I was doing it for fun. The reason I was singing was because we couldn't find a singer. I never expected it becoming bigger than what it was. I really love playing guitar, I love music. Let's go have some fun and drink some booze and that's it. Next thing you know, it exploded. Basically, I got super-lucky. It wasn't what I was aiming to do."

On the amount of input he has on DRAGONFORCE's songs:

Marc: "They want to make sure every song is super-catchy and memorable and it has a hook and everything like that. Normally, by the time it gets to me, it's pretty much set in stone apart from if I can improve on it. There's been times before, I'm, like, 'I can sing this. Can I change this line here?' Make what I think is the better vocal performance by doing something they didn't know I could do. It's very rare they bring something that isn't good. I'm always going, 'Oh, wow, that's a really cool melody. I like that.' Normally what we do is individually come up with lyrical ideas and stuff, bounce them off each other and whoever has come up with something really good, has free rein to write the whole song. It's more of a case of everyone working on it individually. Whoever's got the bright idea, it's, like, 'Okay, you do it.' On this album ['Reaching Into Infinity'], it was fifty percent me, then fifty percent Fred [Leclercq, bass] and Sam [Totman, guitar]."

On his role in DRAGONFORCE:

Marc: "I try and bring a little bit of English charm into the whole thing. Most frontmen generally go big and extreme. I prefer to let the music do the talking. At the beginning, I thought that maybe people want me to be an extreme, big personality. In actual fact, I find that when I watch bands play, if the frontman is like that, I can't really relate to them so much. I'm like 'The guy is a bit of a dick.' I try and be a bit more English with the crowd, and honest and maybe funny. That's what I try to bring to it."

DRAGONFORCE is still touring in support of "Reaching Into Infinity", which was released on May 19 via earMUSIC on CD, LP and a special-edition CD and DVD. The follow-up to 2014's "Maximum Overload" marks the band's third full-length studio release with Hudson, who joined the group in 2011 following the departure of original frontman ZP Theart (now in SKID ROW).