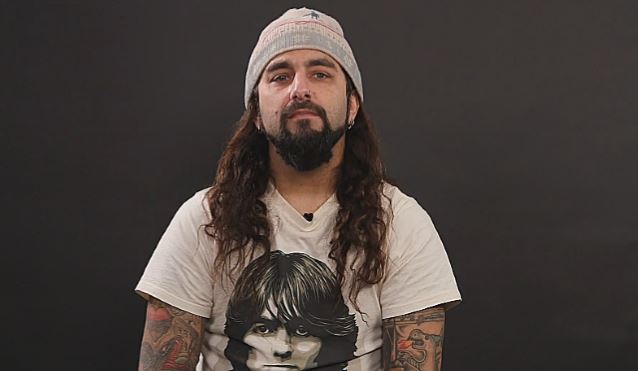 In the latest edition of Loudwire's "Wikipedia: Fact Or Fiction?" signature series, drummer Mike Portnoy (THE WINERY DOGS, DREAM THEATER, AVENGED SEVENFOLD) was invited to prove and disprove what's written about him online. You can watch the chat below. A couple of excerpts follow (transcribed by BLABBERMOUTH.NET).

On whether it's true that he quit DREAM THEATER due to the fact that he wanted a five-year break from the band but the other guys in the group disagreed:

Portnoy: "Well, I mean, obviously, the fact that I left the band is a fact. But the five-year break thing is fiction. That's a… What is it called? Not a rumor… a myth… urban legend. The five-year thing is an urban legend. I never said five years. I just wanted to have a hiatus. Just 'cause we had been going 25 years — boom! boom! boom! — with no break. Write-record-tour, write-record-tour, and it was burning me out. It didn't mean I wanted to stop making music. One of the biggest misconceptions was, after I left DREAM THEATER, I went off and did, like, five different bands and side projects. Everyone was, like, 'We thought you wanted a break.' And it was, like, well, I didn't want a break from making music; I just needed a break from the DREAM THEATER camp. It was 25 years without a break in that camp, and I was just fried. I needed other people and other musical outlets in my life. But the five-year hiatus, I think… I had suggested hiatus of any length, it somehow got misinterpreted as a five-year… which, coincidentally, would have been now. So it would have been up by now, actually — if it was a five-year hiatus."

On whether it's true that he offered to return to DREAM THEATER shortly after quitting the band, but that his offer was rebuffed via DREAM THEATER's lawyer:

Portnoy: "Can I pass? Am I allowed to pass on any of these? I'll just say that there was… Once I left, there was a tremendous amount of legalities and technicalities, so I'll just say that I was doing whatever it would take to keep peace and keep things going smooth. And at that point, they were just only speaking through their lawyer. But it's a 25-year relationship coming to an end, so, obviously, it goes very, very deep, not only personally and emotionally, but also legally, and all the red tape that's involved with something like that. So it was a tough time, a tough period, and, luckily, we all got through it. But, yeah, I don't wish that kind of stuff on anybody in a band. It's tough."

On whether it's true AVENGED SEVENFOLD "severed ties" with him in December 2010, six months into the touring cycle for the band's "Nightmare" album:

Portnoy: "Well, I wouldn't put it that way. All I was ever committed for was that 'Nightmare'… you know, the first six months of the 'Nightmare' tour, ending in December of 2010. So that was all that they ever committed to, it was all I ever committed to, and we saw that through to its completion. Where we were gonna go from there, we didn't know. And I think once I left DREAM THEATER, it was so much drama and bullshit and the stupid headlines and all the bullshit, there was so much drama, I think it really turned the AVENGED guys off. And I was trying to… I never put out these press releases and was trying to be in the Blabbermouth headlines every day. But these web sites were just doing whatever they could to get the dirt. So I think AVENGED really wanted to stay away from all that controversy, and at that point, it was, like, 'All right, let's finish out what was agreed upon,' and then I'll go do my thing and they'll do their thing. I don't think they wanted to be held responsible for my decision to leave the band. I think there already was backlash in their camp, and I think that they were feeling that heat, and they didn't want controversy. They were still healing from [late AVENGED SEVENFOLD drummer] The Rev's death and everything, so the last thing they wanted was all this DREAM THEATER bullshit. So I don't blame them. I get it."