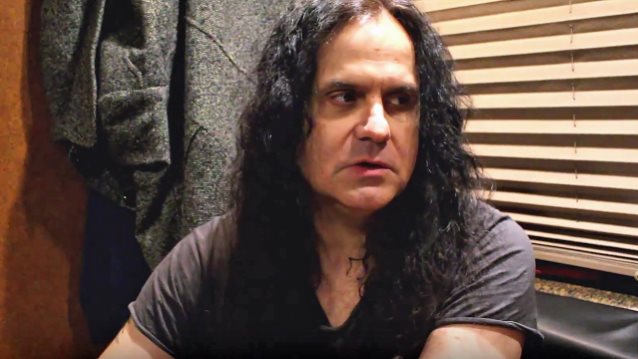 Echo of The Metal Authority conducted an interview with guitarist/vocalist Mille Petrozza of German thrash metal veterans KREATOR before the band's March 19 concert in Tampa, Florida. You can now watch the chat below.

Asked about the lyrical message on KREATOR's latest album, "Gods Of Violence", Mille said: "It's hard to explain. If you already got the glimpe and got the idea that the lyrics are in a way… Of course, I use graphic words and very strong and heavy vocabulary, but the message is a positive one, of course. That is because a lot of the lyrics are very metaphoric and very much deal with issues that I… When I think about certain events and certain things… Like, for example, 'Satan Is Real', of course I don't think Satan is real. I don't think any of these religious icons are real. To me, it's just an expression, an example for Satan, God, Allah… whoever you want him to be. And I think this shouldn't be real in this day and age. That's why the song 'Satan Is Real' reflects on the fact that a lot of the problems that we have in this day and age are based on religion and the way people interpret religion and how they make religion a tool to manipulate people and make them do very evil things."

"Gods Of Violence" entered the official chart in Germany at position No. 1. The cover artwork for the album was created by renowned artist Jan Meininghaus, who also made the limited-edition artwork for KREATOR's previous effort, 2012's "Phantom Antichrist", and has lent his talents to bands like BOLT THROWER, ACCEPT and OVERKILL in the past.