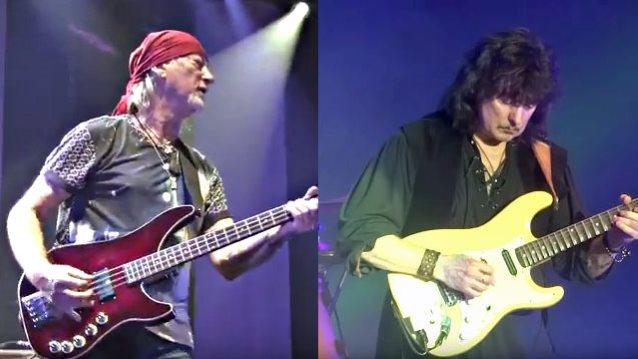 DEEP PURPLE bassist Roger Glover says Ritchie Blackmore should have gone out under his own name instead of resurrecting RAINBOW for the guitarist's 2016 return to the rock live stage.

Glover, who played with Blackmore in DEEP PURPLE for many years and was a member of RAINBOW for from 1979 to 1984, working on four of the latter group's studio albums, was asked in a new interview with AntiHero Magazine what his thoughts were on Blackmore's reactivation of RAINBOW. "[I've got] no views on it," he responded. "I mean, I wish him luck. In a way, calling it RAINBOW, I thought, he's got his own name, I would have thought he should've gone out as just Ritchie Blackmore and just played some really great band … I don't want to disparage him at all, I'm a fan of Ritchie as much as anyone else is. He's a musician. I'm blown away that I got to work with such a musician. So, yeah, I wish him luck."

Glover told Music Radar in a 2013 interview that his role in RAINBOW was primarily that of a producer. "In the six years I was off the road with PURPLE, I produced a lot of music," he explained. "I made my peace with Ritchie even though he was the main reason I wasn't in the band. I met up with him again in '76 or '77 in a studio and he played me 'Stargazer'. It blew me way. I had always been a [Ronnie James] Dio fan; I more or less discovered Ronnie in '72 with ELF. Although 'Rising' was a brilliant album, it didn't sell that much. I was brought in to change the fortunes of the band. And it did. I was playing bass and writing all the parts, but I wasn't in the band until the album was finished. [Drummer] Cozy Powell said to me, 'Why aren't you in the band?' I said it him, 'I can't just join a band because I feel like it. I've got to be asked.' That was definitely Ritchie's band. Just because we were equals in PURPLE that doesn't mean we were equals in RAINBOW."

Joe Lynn Turner, who was the singer of RAINBOW between 1980 and 1984, last year slammed Blackmore for the guitarist's decision to go out and perform classic DEEP PURPLE and RAINBOW material with a new group musicians instead of reforming RAINBOW with a more "authentic" lineup.