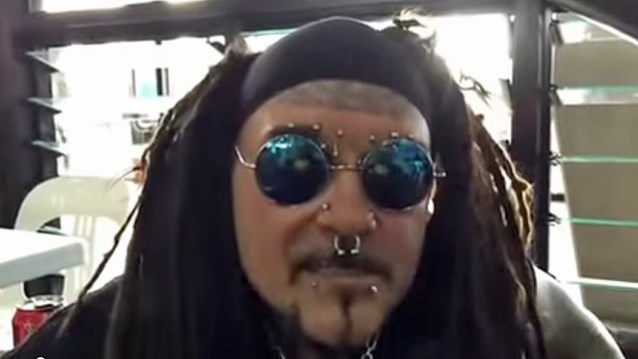 "We decided to cut out the middle men," Jourgensen told "The Metal Hammer Magazine Show ". "Me and him are doing this music that's just eyeball-popping. There's nothing under 220pbm on there. It's not for the faint of heart."

According to Jourgensen, the material on SURGICAL METH MACHINE's debut album will be similar to the song "Side F/X Include Mikey's Middle Finger (TV4)", which appeared on MINISTRY's last studio album, "From Beer To Eternity", released one year following the death of MINISTRY guitarist and Al's close friend Mike Scaccia in 2012.

"'Mikey's Middle Finger' is one of the last things Mike did before he died," Al said. "Imagine a whole album of that — this is what we're going for now. Straight mayhem."

He added: "People are probably going to dismiss it as craziness — and that's good. Craziness develops a future in music. You need the crazy."

MINISTRY is currently touring Australia as part of the Soundwave festival, and there are a number of other live shows confirmed in the coming months.

Jourgensen told "The Metal Hammer Magazine Show": "We're going to do one last tour as MINISTRY, maybe even another tour, because people seem to want to see it. [But] as far as future studio releases, since Mikey's death, I decided it's not the same. It would be like [LED] ZEPPELIN playing without [John] Bonham or THE WHO playing without [Keith] Moon or something like that. Me playing without Mikey doesn't seem right."