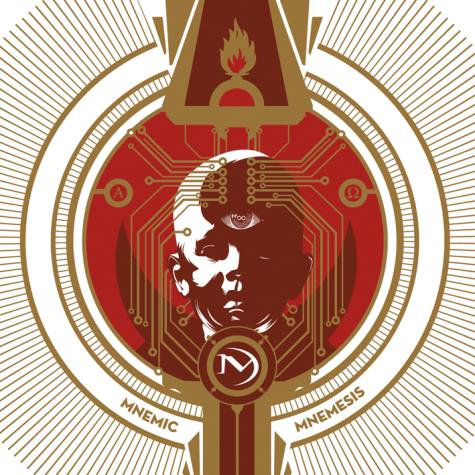 "I've Been You", the new single from Danish modern metallers MNEMIC, can be streamed using the SoundCloud player below. The song comes off the band's fifth album, "Mnemesis", which will be released in Europe on June 8 via Nuclear Blast Records. The CD was recorded at Antfarm studios in Aabyhøj, Denmark with longtime producer Tue Madsen (THE HAUNTED, HIMSA, SICK OF IT ALL). The cover artwork was created by Metastazis (MORBID ANGEL, THE BLACK DAHLIA MURDER, PARADISE LOST, ULVER) and can be seen below.

Commented MNEMIC guitarist Mircea Gabriel Eftemie: "This is the first single of the new album and at the same time one of the most accessible songs on it — it's simple, easy to digest and just melodic. If you thought you were about to listen to something technical, weird and crazy — or supposedly djenty, which we are not — you were wrong. You would have had to listen to the other songs, 'cause they might be like that — who knows? Maybe you should get the album once it's out, and let us know what you think. You can always tell us if it sucks or rules on our Facebook page!"

As previously reported, MNEMIC bassist Simone Bertozzi will miss the first three shows of the band's upcoming tour due to "some last-minute kidney issues." He says, "I'm feeling well already, but, unfortunately, I'm forced to miss the [dates] in order to take the necessary medical tests and treatment measures. No panic, though, 'cause longtime friend Bo Lund (also known as THE HAUNTED's sound engineer) will provide the proper low-end dose on the first gig in Lyngby (Denmark),and the guys will increase their headbanging for the Czech Republic gigs to fill my empty spot. I will get back on the road with my fellas starting from Sunday, May 6th in Ferrara, Italy."

MNEMIC's fourth studio album, "Sons Of The System", was released in Europe on January 15, 2010 and in North America on January 26, 2010 via Nuclear Blast Records.