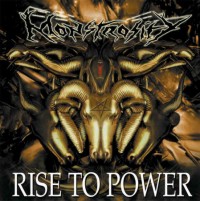 MONSTROSITY are scheduled to co-headline the Las Vegas Metal Fest on August 30 with DEICIDE and SUFFOCATION. However, the rumors of MONSTROSITY playing the James Murphy Benefit show in St. Petersburg on September 6 are "false," according to an official press release. The band "was never officially contacted regarding the show and have never agreed to play. The band wish James the best of luck but MONSTROSITY at this time won't be performing any benefits."

To see photos from the recording session click here.