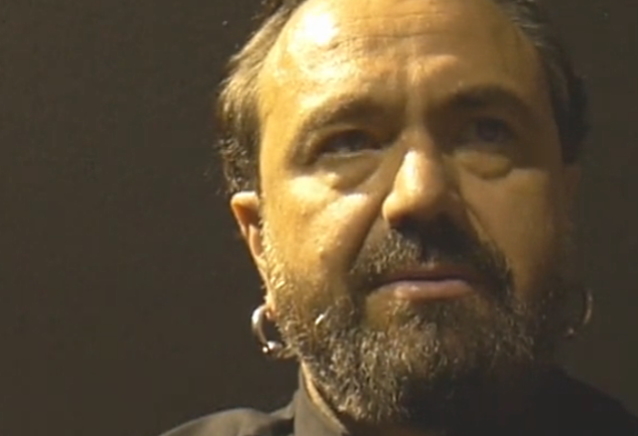 At this past June's Hellfest in Clisson, France, vocalist Fernando Ribeiro of Portuguese metallers MOONSPELL was asked if he had any regrets or things about his career that he wishes he could go back and change. He responded (as transcribed by BLABBERMOUTH.NET): "I would never have formed the band. I would be a teacher. That's what I was studying for, [to be a] teacher of philosophy."

He continued: "I know it's a good question, but it's hard for me to think about the band like this, because time doesn't stop. We are 30 years [old] this year. Sometimes it looks like we are in the band for 300 years when we are very tired; sometimes it feels like it just started yesterday.

"I think that only when the band is no more can we answer properly that kind of question: 'I should have done this', 'I should have done this.' Obviously, there's mistakes, there's things that you could have avoided, maybe. But it's time wasted to be thinking about what you've done. But not only about the stuff you regret but also the stuff you are proud of — because you are as good as your last show, you are as good as your last album and your legacy. So everything else is just a fabrication of people.

"Sometimes people will tell me, 'Oh, you were so good on 'Wolfheart'.' I say, 'We weren't so good. We were very young back then.' And you're not angry at me because we're doing different music; you're angry with the world and we are a scapegoat because you were young and you could drink all night and not have a hangover. So this nostalgia thing, et cetera, it can be beautiful but it also can disturb, can get in the way. That's why I always try to listen… For instance, if I just like [IRON MAIDEN's] 'Seventh Son Of A Seventh Son' or 'Powerslave', I would have missed 'Senjutsu'. I would have missed it, and it's a great album. If I only liked, and I do love, 'Walls Of Jericho' from HELLOWEEN, I would have missed the opportunity of listening to the new one, which is amazing; it's one of the best albums.

"So, yeah, I think that music, it's a constant flow and we cannot handle the time. So I never regret anything and I don't specially proud. I feel lucky most of the days to come out of Portugal and to play at the Hellfest… Not many Portuguese bands played here. And that's just already the fourth or the fifth time. So that's what I am happy for."

Last month, MOONSPELL announced a very special Blu-ray/DVD and album release. On September 23, they will unleash a live performance of their latest studio album, "Hermitage" (2021),with "From Down Below - Live 80 Meters Deep" via Napalm Records.

MOONSPELL will embark on a North American tour later this month. Support on the trek, which will kick off on August 25 in New York and end on September 18 in Boston, will come from SWALLOW THE SUN and WITHERFALL.