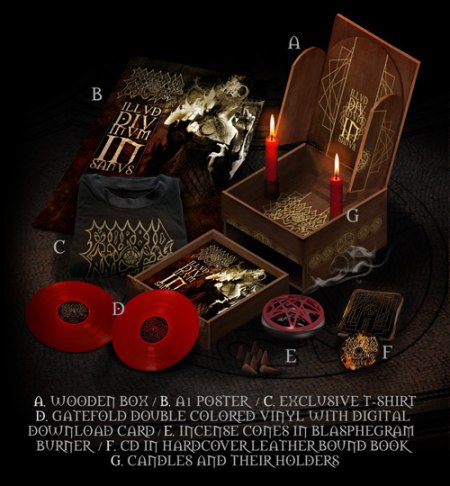 Florida-based death metal veterans MORBID ANGEL will release their long-awaited eighth studio album, "Illud Divinum Insanus", on June 7 (one day earlier internationally) via Season of Mist. The cover artwork was designed by Gustavo Sazes and can be viewed below.

"Illud Divinum Insanus" will be available in the following formats:

Most of these formats are already available for pre-order on Season of Mist's e-shop.

The wooden foldout box is a triptych made of solid fine wood with all panels engraved, and includes the following items:

All above items are exclusively made for this limited box and will not be available separately!

Commented Sazes: "To create this cover we worked from several references, ideas, elements, and I would say a 'world' of options and paths.

"After a long brainstorming period and some [good and bad] ideas left behind, we came up with the concept of this organic surreal insane being; a fallen God or a weird mirror image of our own madness. It is a different MORBID ANGEL cover for sure, but I think that's how MORBID ANGEL is...Deviant and different on each new release. They never repeat themselves. They are always pushing the boundaries and setting new standards.

"I'm really proud of the final results and hope the fans appreciate my work, while listening to the new album!"

Prior to the release of the album, a single for the song "Nevermore" will be made available on May 16 as a digital download and seven-inch vinyl single. The B-side is an exclusive version of new song "Destructos Vs. The Earth", remixed by COMBICHRIST.

"Of all the remixes I've been asked to do I never expected one of the world's most notorious death metal bands to have an interest in hearing their music on the dance floor," said COMBICHRIST mainman Andy LaPlegua. "However, 'Destructos' is one of those tracks that are so versatile that it could have been recorded as a folk song and it would still sound amazing.

"I'm honored to be a part of this project and am excited to see how the MORBID ANGEL fans react to this unusual new direction."

The cover artwork for the single was designed by French artists Valnoir and Fursy Teyssier for Metastazis.

The drum tracks to six songs on "Illud Divinum Insanus" were recorded at Mana Recording Studios in St. Petersburg, Florida with engineer Erik Rutan (former MORBID ANGEL guitarist and producer for such bands as CANNIBAL CORPSE and GOATWHORE). The new CD will be the band's first to be recorded without longtime drummer Pedro "Pete" Sandoval, who last year underwent back surgery for a deteriorating disc problem. Filling in for him on a temporary basis is Tim Yeung, who has previously played with DIVINE HERESY, ALL THAT REMAINS, NILE, HATE ETERNAL and VITAL REMAINS).

"We played the new song 'Nevemore' on the last tour and that kind of shows where our heads are at," he said. "I'd say it's like an assemblage of all sorts of stuff from the catalog and some new influences. I listen to a lot of hardcore [techno] music now — the fuckin' serious, artistic stuff, not that crap you hear at the clubs. That stuff has impact and it's really extreme. Even if there's no guitar in it or no real drums, the energy coming out of the speakers is amazing." He added, "All I can say is, when it's ready, it's going to be extreme and outside the box. And, hopefully, the songs will inspire people to look deeper inside themselves for 'the stuff' and to tap that potential that we as human beings have."