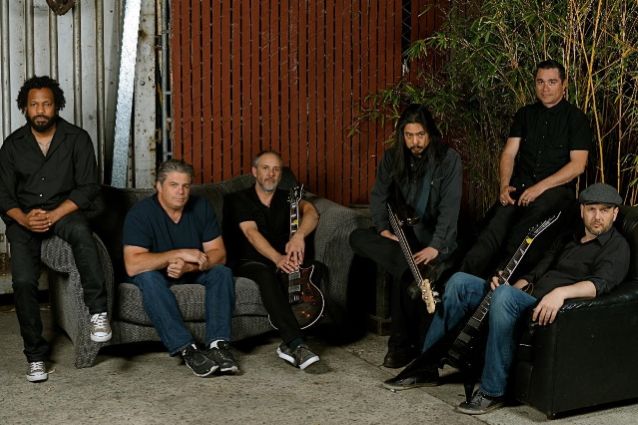 MORDRED To Release First Full-Length Album In Over 25 Years, 'The Dark Parade', In The Spring

The acclaimed and influential crossover thrash band MORDRED has signed with M-Theory Audio. The group will release "The Dark Parade" — its first full-length record in over 25 years — in the spring of 2021.

MORDRED was formed in 1984 as the burgeoning San Francisco Bay Area thrash scene was beginning its rise to global prominence. While mosh-inducing thrash formed the basic blueprint of their sound, MORDRED stood out as a unique presence thanks to their integration of funk-infused musicianship and hip-hop influences. The group was one of the first bands to explore those diversities in extremes, but as the dexterous bass performance of Art Liboon and innovative turntable work from band collaborator Aaron "DJ Pause" Vaughn provided a new spin on the thrash metal genre, MORDRED retained their metallic bark thanks to groove-laden shred from guitarists Danny White and James Sanguinetti, and energetic shout-along choruses spearheaded by vocalist Scott Holderby. That combination of thrash metal and exploratory soul powered three full-lengths on Noise Records between 1989 and 1994, from their revered debut "Fool's Game" to their even more eclectic sophomore follow-up "In This Life" through their final — until now — record, "The Next Room".

MORDRED formally reunited in 2013 for live performances, but outside of the release of lone single, "The Baroness", in 2015, fans would have to wait for new music until this past summer. Longtime fans of the band were finally satiated with the June 2020 release of the four-song EP "Volition". The new songs saw the band — which now consists of five-sixths of the classic lineup, plus new drummer Jeff Gomes (formerly of FUNGO MUNGO and MIRV) — reviving the sounds that led them to become cult favorites 30 years ago. The group recently released a music video for "Not For You", the lead-off track from "Volition".

The "Volition" EP is only a small taste of things to come from the revitalized MORDRED, as the band has finished recording "The Dark Parade", and is currently completing the LP mix.

"I'm excited to announce the signing of MORDRED," says M-Theory Audio label founder Marco Barbieri. "The band is legendary to me from reading about their early demos, to witnessing the group live at my first Bay Area club show after moving to California in '87, to following their signing and releases via Noise Records.

"MORDRED were always part of the Bay Area thrash fabric that I love so dearly but took their sound to whole new places creating something fresh and alternative and able to crossover between scenes when no one had the nerve or ingenuity to do so. I was stoked to see them reform and more so when they released new music. I knew that we needed to get involved in a cooperation to bridge the gaps between generations and styles and get their name and music back out there."

"We're super-psyched to be active again, and the kind of deal we have with M-Theory lets us maintain control of our music while benefiting from the expertise of Marco's experience in the industry," says guitarist Danny White. "It's the best of both worlds. MORDRED is putting the M-Theory into practice."

In addition to putting the finishing touches on "The Dark Parade", MORDRED has also entertained audiences throughout 2020 with their streaming variety show and concert series, "Mordred: Acting The Fool!" where the band collaborates with writer, director, videographer Christian Powell and features live music, interviews, sketch comedy and burlesque performances. The next edition of will stream live on Halloween night. The Halloween broadcast will feature a performance by MORDRED and the debut of music from "The Dark Parade". The event will also feature guest appearances from guitarist Jude Gold (JEFFERSON STARSHIP),burlesque performer Miss Kitty Oaks and South American thrashers DESASTRE NATURAL, as well as a healthy dose of tomfoolery, shenanigans, skits and shorts to satisfy any desire for the ridiculous and bizarre!