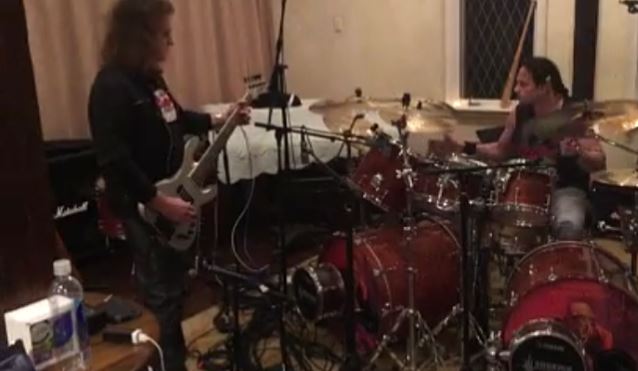 More video footage has been posted online of former MEGADETH drummer Nick Menza jamming with the band's bassist, David Ellefson, at Dave Mustaine's house/studio in Southern California in December 2014 as part of what turned out to be a failed attempt at a reunion of MEGADETH's classic "Rust In Peace" lineup. The clip, which was filmed and shared by Mustaine's son Justis, can be seen below.

Said Menza: "I was totally ready and excited to get back in MEGADETH. We jammed for the weekend and it was totally cool. We instantly fell right back into our musical groove together. We have great chemistry. It's a magical thing!"

Menza explained to the "The Sick Room" podcast why his return to MEGADETH failed to materialize. He said: "I went out there [to Dave Mustaine's studio] and jammed with [Mustaine and David Ellefson]. We played for, like, a weekend — like, three days — and on the third day, we were working on new songs. And everything was cool. They were telling me, 'You're back in the band. We'll do a press release.' And I'm, like, 'I don't wanna say anything until I have an agreement, a contract in writing of what's gonna happen.' And then they send me this ridiculous proposal stating that, 'You're not gonna paid anything until the touring starts.' So, basically, I was gonna work for nothing, doing the record. Which I was still kind of ready to bend in that direction anyway. But I'm, like, 'You know what?! I'm not gonna break or sell myself short with something that's gonna be huge. They've gotta realize the longevity of it.' And then they were kind of coming back at me the same way. So the whole thing was silly. I didn't even get a chance to negotiate with them about anything. They just put it off and said, 'That's it.' And I couldn't get hold of anybody."

In an interview with RollingStone.com, Mustaine talked in general terms about why the reunion of MEGADETH's classic "Rust In Peace" lineup didn't happen, He said: "Contrary to all the scuttlebutt that's going around, I wish [Nick and guitarist Marty Friedman] the best," Mustaine said. "But their recollections of the events that led up to it and happened after are considerably different from my recollection. But here's the thing — a lot of people, they either love or hate me. If I tell anybody what happened, it's not gonna change the way they feel about me. But it'll probably change the way they feel about them. And I don't want to hurt anybody. All I can say I think they're both tremendous musicians and talented guys.

Asked if this year's NAMM show in Anaheim, California marked the first time the four of them — Mustaine, Friedman, Menza and Ellefson — had actually sat down in a room together since the initial dissolution of that lineup some 15 years ago, Mustaine responded: "I think so. After my arm was injured in 2001, if you remember at that time, we had Al Pitrelli playing guitar with us, because Marty had had a nervous breakdown and had left the band. Then my arm got hurt and I said, 'Look, I'm done.' I didn't touch a guitar for 17 months. My arm was so damaged I couldn't even hold a cigarette. But when I decided to come out of retirement, I did reach out to David and Marty and Nick and talked to all of them about doing this again. But it just wasn't meant to happen. I think there was so much bitterness because of the people that were managing us at the time. If you poison the well, you can't expect there to be an area of clean water anywhere. Everyone gets poisoned. Everyone was upset and they looked to me to blame. And I am responsible for a lot of the decisions that we make."

MEGADETH's next album will be the band's first to feature Brazilian guitarist Kiko Loureiro, best known for his work with ANGRA, and LAMB OF GOD drummer Chris Adler.

AWWH IT'S SIDEWAYS SORRY IN ADVANCE lol#TBT We tried! To all of you who had guessed the mysterious drummer in my video I posted, at the time you were right. Best of luck to everyone. \m/ #RustInPeace