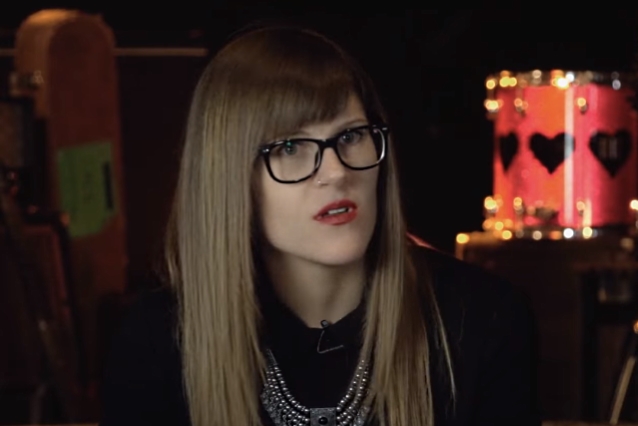 After the London, Ontario, Canada-based metallers completed the touring cycle for 2011's "I've Failed You" album, KITTIE entered a long period of inactivity during which the guitarist/vocalist focused on a marketing job for a chain of fitness clubs, while her sister, drummer Mercedes Lander, worked in real estate. The group also began work on a career-spanning documentary, "Origins/Evolutions", which finally saw the light of day last year via Lightyear Entertainment in North America.

Asked by "Talk Toomey" in an interview if there are any plans for KITTIE to release new music at some point in the future, Morgan said (hear audio below): "Well, I wouldn't say 'never say never,' but at this point, a lot of the stuff that we were working on has stagnated.

"We were, for a number of years, leading up to the release of the documentary, signed to eOne," she continued. "And we no longer are actually signed to eOne anymore, so we are free agents. But we were trying to entice the label, eOne, to put out another album and whatnot, and it just never ended up happening. So, at this point, [we] put the brakes on [working on new music]. Right now, we're working on a lot of legacy projects — obviously, we released the documentary, and there's a live thing coming out as well."

Morgan added: "I don't know. There's a part of me that always kind of feels like… To make a new album, it wouldn't feel right because the person that would be playing bass on the album is no longer with us. Ivy [Ivana Vujic, who played bass for KITTIE from 2007 until 2012] had left the band a number of years ago, she started a family, things are different for her now, so I don't think that she would be the right person to wanna do that. I know that she probably would.

"For KITTIE and who we were, towards, I guess, the end of this last album cycle — with Tara [McLeod, guitar] and Trish and Mercedes and I — it just doesn't feel right for me [to continue without Trish]. Which is a big part of why maybe I do feel hesitant to do it — because it just doesn't seem right to just do it for the sake of doing it. At this point, I wanna be able to do it because I think it's a lot of fun and I wanna do music with my friends. And it's sad that she is not around to be a part of that."