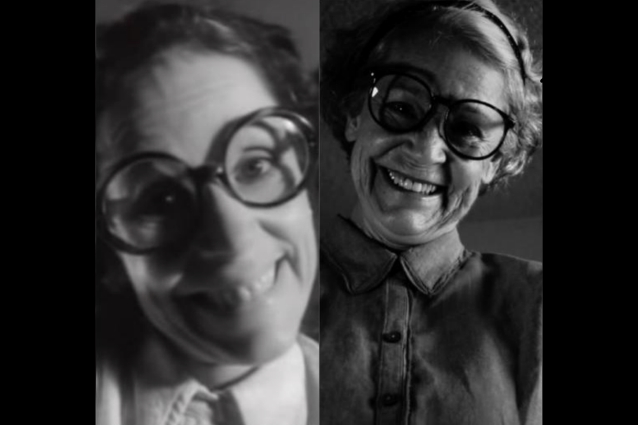 Actress Ruth Silveira has been busy since she played the unforgettable role of the "mother" in VAN HALEN's "Hot For Teacher" music video more than three and a half decades ago. She's worked on over 60 television and film projects, including everything from "House M.D." to "Growing Pains". She raised two daughters and now helps raise her grandchildren in the Los Angeles area. She recently reprised the role of the "mother" for a new music video collaboration titled "This Rap Makes No Sense". Comedian Joe Hernández-Kolski wrote and performed the lyrics and musicians THING OF TWINS wrote and performed the music.

Hernandez-Kolski says: "I've known Ruth for many years. We're both members of Sacred Fools Theater Company. I only found out recently, however, that she was in the 'Hot For Teacher' music video. I lost my mind because VAN HALEN has always been my all-time favorite band.

"When I started thinking about making a music video for the song, I immediately knew that I wanted to pay homage to the original video.

"Ruth was a wonderful professional. She came in and recreated the role in one take."

Watch the video for "This Rap Makes No Sense" below.

The "Hot For Teacher" video was filmed at John Marshall High School in Los Angeles, California. Because the school had been shut down due to insufficient funds at the time the video was recorded, VAN HALEN not only paid to rent the school for four days of filming but they also contributed money to the city to help get it reopened.