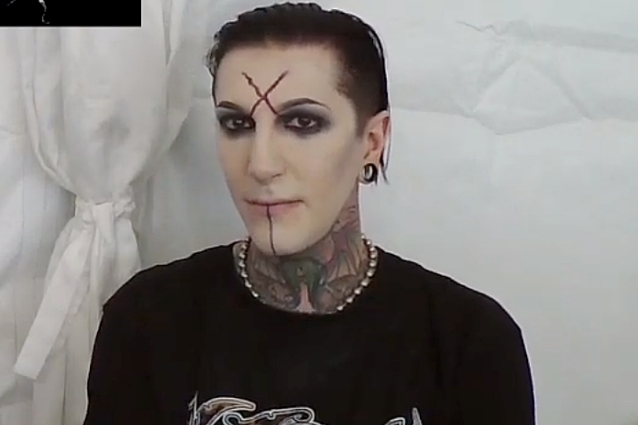 MOTIONLESS IN WHITE frontman Chris "Motionless" Cerulli says that being interviewed by Dee Snider for an episode of the TWISTED SISTER singer's "I Wanna Talk" podcast was a memorable experience.

"Dee is like the ultimate rock star in the best sense of the word," Chris told MA Entertainment Global during a recent interview (see video below). "He's just such a rad guy. He understands everything about this world inside out and backwards, and he's just such a mouthpiece for what we represent and such a leader and a pioneer for what we get to do now as a band. Just getting to talk with him on that real level was an opportunity I can't say I thought I would have in life."

Asked if he was a fan of TWISTED SISTER growing up, Chris said: "Oh, yeah. My parents were into TWISTED SISTER. I remember hearing all the singles and stuff, and seeing it on MTV, watching the videos of them kicking the guy out of the house. It was super cool."

Back in 2011, Snider was transformed into Biblical figure Pontius Pilate for MOTIONLESS IN WHITE's music video for the song "Immaculate Misconception", with Cerulli in the role of Jesus Christ.

MOTIONLESS IN WHITE's acclaimed new album, "Disguise", is available now at all DSPs. "Disguise" is highlighted by a series of singles, including "Brand New Numb", "Undead Ahead 2: The Tale Of The Midnight Ride" and "Disguise", the latter joined by a companion video directed by frequent collaborators Jeremy Danger and Travis Shinn. In addition, "Brand New Numb" was recently joined by an official visual, directed by Max Moore.