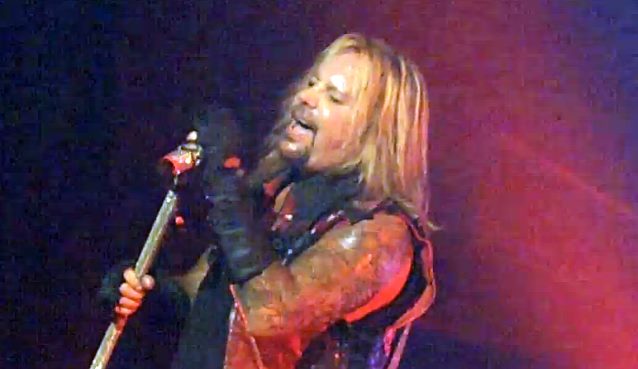 MÖTLEY CRÜE kicked off its second residency at The Joint at Hard Rock Hotel & Casino in Las Vegas this past Wednesday night (September 18).

Fan-filmed video footage of the second concert of the residency — which took place last night (Friday, September 20) — can be seen below.

The fall shows, dubbed "Evening In Hell", are an all-new production and the band is pushing its own envelope once again. The production was designed exclusively for The Joint in partnership with AEG Live and sees the band performing in front of just 4,000 people per show max, a far cry from the arenas MÖTLEY CRÜE is accustomed to playing.

"There is no show like this. There never has been, and there never will be," MÖTLEY CRÜE lead singer Vince Neil told Robin Leach of the Las Vegas Sun. "You've seen video fire from other rock acts on tour, but never the real thing."

Vince continued: "It's more than any rock group has ever produced or attempted. It really is entering the depths of hell. There's fire all around and fire coming down from above.

“There's no question this is the most dangerous theatrics ever created and far more than anything we expected. But, hey, this is Vegas, and we do bigger, bolder, badder, sleazier here better than any other place on Earth.

"We have the best fire tech experts in the world. This is so over the top, the only thing cool is what we do! Basically, we're setting everything on fire in a way that's never been done before."

Vince also spoke about the challenge of singing nonstop for 90 minutes. "I don't get one break," he told the Las Vegas Sun. "We start with a song from when we began 30 years ago. We've reached back over the years to old hits to match up with new hits. It's a difficult setlist for me vocally — 'Too Young To Fall In Love' is no easy song to perform."