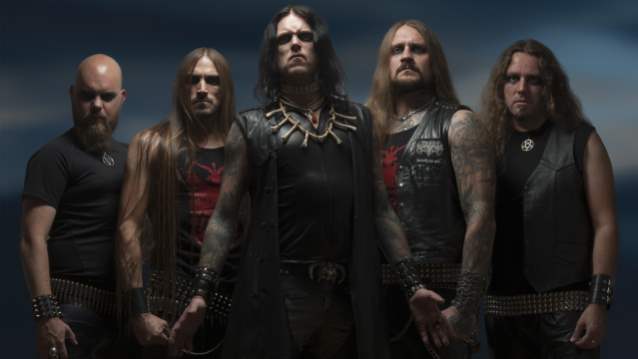 A Swedish appeals court has reduced the prison sentence for NECROPHOBIC vocalist Tobias Sidegård, who was accused of beating his wife multiple times between September 2011 and April 2013.

Sidegård was originally sentenced to 18 months in prison for "gross violation of a woman's integrity," and offense that was first introduced into the Penal Code in 1998 dealing with repeated punishable acts directed by men against women who have or have had a close relationship with the perpetrator.

This past Friday (September 20),the Svea appeals court found Sidegård guilty of simple assault — a less serious offense than "gross violation of a woman's integrity" — and reduced his prison sentence to six months. The musician was also ordered to pay his wife 16,000 Swedish kronor (approximately $2,500) in damages plus interest.

In addition to allegations of violence against his wife, Sidegård was suspected of physically abusing his daughters with a homemade bullwhip.

The Swedish-language document detailing the Svea appeals court's decision to reduce Tobias' sentence can be downloaded as a PDF file at this location.

Two separate Swedish media reports (in which Sidegård was not identified by name) from May 2013 regarding the allegations against the NECROPHOBIC frontman can be found by following these links:

Sidegård previously denied all charges through his attorney, claiming that the injuries suffered by Tobias' wife that were described in the indictment occurred in "other ways" than through physical abuse perpetrated by the musician.

Tobias sent an e-mail to the Metal Insider and MetalSucks web sites earier in the month insisting that he was "set free after second appeal in higher court." "I've been fucking innocently accused and never hit a woman in my life," he wrote.

The other members of NECROPHOBIC released a statement two weeks ago in which they declined to comment on the allegations against their singer — pointing out that the legal process was still "ongoing" — but stressed that they did "not condone domestic violence."

NECROPHOBIC will release its seventh full-length album, "Womb Of Lilithu", on October 29 (four days earlier in Europe) via Season Of Mist.