MÖTLEY CRÜE is still waiting for an official word about a possible postponement of the band's "The Stadium Tour" with DEF LEPPARD, POISON and JOAN JETT & THE BLACKHEARTS.

Most concerts and festivals have been canceled or rescheduled due to the coronavirus pandemic that is sweeping the globe. Shows aren't going to happen in April and May, and several major events that were slated to happen this summer have been called off. And with each passing day, more summer tours are in greater jeopardy of being scrapped, including "The Stadium Tour".

On Tuesday (April 21),MÖTLEY CRÜE shared a photo of a live-performance scene from its "The Dirt" biopic and included the following quote from the movie: "We wanna knock people on the asses, we gotta give them a show." In a reponse, a fan commented: "Cancel the tour already so your fans can get their money back. No tours are happening this year. Do the right thing. BON JOVI did". To which MÖTLEY CRÜE replied: "Bands don't decide this. We await info as well."

Another fan chimed in: "Is this stadium tour on or off? So confusing with everyone saying different things. Governor said no shows till 2021 so what's going on? I have VIP" MÖTLEY CRÜE responded: "No one has said anything as yet."

Earlier in the month, Billboard published an interview with Tommy Lee in which the MÖTLEY CRÜE drummer said that "The Stadium Tour" was "still a go." During the chat, which happened on April 1, Lee insisted: "Everything's still a go. We're all in constant communication. Nikki [Sixx, bassist] and I have been in several production meetings."

Lee added: "By the time all this fucking apocalyptic bullshit is over, I think everyone's going to be in a really good mood to go out and have the fucking best time ever. I really do. I hope everyone stays inside, and we can get a fucking grip on this and get back to people having their normal lives."

"The Stadium Tour" is currently scheduled to kick off on June 18 in Jacksonville, Florida. The 31-date trek will mark the CRÜE's first live dates since wrapping its 2014/2015 farewell tour, although it remains to be seen whether large public gatherings will be viable again by the time the tour is slated to begin.

CRÜE toured with POISON back in 2011 and DEF LEPPARD teamed up with POISON for a string of road dates in 2017 — but the upcoming jaunt marks the first time all four acts have hit the road together for an extended tour. 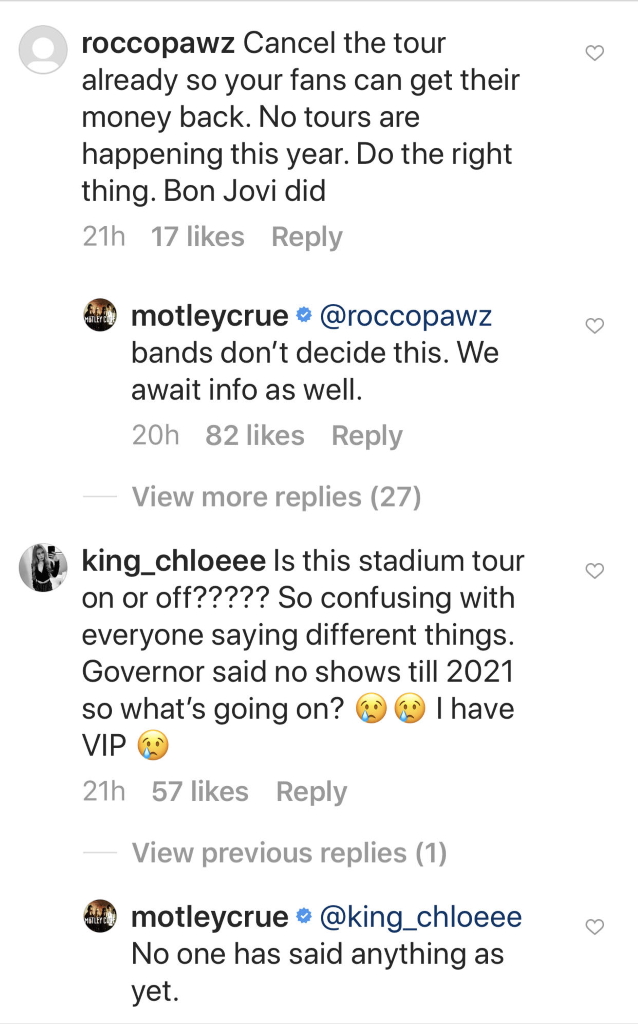 ‘We wanna knock people on the asses, we gotta give them a show’ #mötleycrüe #TheDirt @netflix #muzzlethat