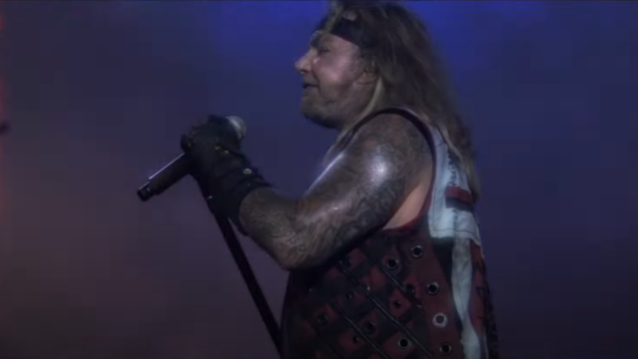 MÖTLEY CRÜE On Weather-Related Delay Of Washington, D.C. Concert: 'It Wasn't Looking Like We Would Go On'

MÖTLEY CRÜE's concert this past Wednesday night (June 22) at Nationals Park in Washington, D.C. in front of about 40,000 fans marked the second of the first four "The Stadium Tour" dates disrupted by rain and lightning. CRÜE's headlining show followed a 90-minute wait until the lightning — but not the rain — ceased.

MÖTLEY CRÜE has shared a two-minute video recap of the Washington, D.C. performance, and the band included the following message: "Right before our set was about to begin we were forced to evacuate all the fans to a shelter in place. The stadium curfew was 11pm, so it wasn't looking like we would go on. Almost a solid hour passed with pouring rain and lightning, it was looking more than likely we would have to reschedule the show. We were all extremely bummed after eating to play for our fans. At the last minute, we got the call - the show could go on! The fans came back in and got drenched along with us, and the energy and support was unmatched by the time the band got on. We could feel that special connection between the fans and the band and you can see on our faces how much we loved this showWhat an eclectic night - See you again Washington D.C."

As was the case at the previous three shows of "The Stadium Tour", MÖTLEY CRÜE's Tommy Lee once again defied doctor's orders — despite sustaining four broken ribs — to take part in his band's long-awaited return to the stage with DEF LEPPARD, POISON and JOAN JETT & THE BLACKHEARTS.

After playing three songs with his bandmates, Lee told the crowd that he had broken four ribs, and his doctor told him he couldn't perform. He also took the opportunity to have some fun with the audience, bringing out what appears to be a roasting pan full of beer cans and ribs, which he then proceeded to throw into the crowd.

CRÜE's long-delayed North American trek with DEF LEPPARD, POISON and JOAN JETT & THE BLACKHEARTS was originally planned for 2020 and later moved to 2021 and then to 2022 due to the coronavirus pandemic which is sweeping the globe. "The Stadium Tour" will conclude on September 9 in Las Vegas, Nevada.

The next show on the trek is scheduled to take place Friday night (June 24) at Citi Field in Queens, New York.