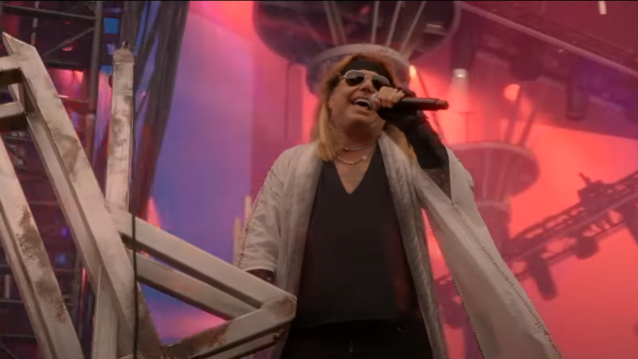 MÖTLEY CRÜE: 'Story Of Their Songs' To Premiere On REELZ This Weekend

"Mötley Crüe: Story Of Their Songs" tells the inside story of six unforgettable songs that took MÖTLEY CRÜE from Sunset Strip wannabes to giants of metal. We discover how the group's love of Alice Cooper and 1970s U.K. glam rock inspired early classics like "Live Wire" and how, unbeknownst to band members, the video for breakthrough track "Looks That Kill" was inspired by the operas of Richard Wagner. We explore how the band managed to survive the aftermath of the tragically fatal car crash, which saw singer Vince Neil jailed. And we hear how biopic "The Dirt" has introduced MÖTLEY CRÜE to a new generation, leading them to tear up the contract where it had vowed never to play live again. Record producer Tom Werman recalls eating sushi with Nikki Sixx the night after the bass player had famously briefly died after a drug overdose. Bob Rock marvels at how he "lucked out" when a newly sober band turned up to make the landmark "Dr. Feelgood" album, with him at the controls. Video makers Wayne Isham and Curt Marvis recall the antics on the legendary "Girls, Girls, Girls" video shoot, that led to filming being shut down, while cinematographer Toby Phillips recalls the feverish excitement as the band returned to West Hollywood’s Whisky a Go Go to film "Kickstart My Heart".

With an incendiary cocktail of dark visuals and blistering sound MÖTLEY CRÜE epitomizes rock and roll excess. For more than four decades MÖTLEY CRÜE has lived life on the edge selling more than 100 million albums and are still selling out stadiums with the recent start of their latest North American tour. Now "Mötley Crüe: Story of Their Songs" reveals the inspiration behind the hits that propelled them to rock immortality, from their debut hit "Live Wire", ramping up the controversy with "Looks That Kill" and surprising everyone with an epic and poignant ballad "Home Sweet Home" to the anthemic "Dr. Feelgood", the unapologetic "Girls, Girls, Girls" and the electrifying hit "Kickstart My Heart" inspired by the brush with death experience of co-founder, bassist and songwriter Nikki Sixx.

Back in June 2019, Neil and Sixx both slammed an episode of the Reelz documentary series "Breaking The Band", which focused on the history of their band.

Neil complained on social media about the way his 1992 exit from CRÜE was portrayed in the documentary. The split happened after an argument between him and the other members of the band which the singer claims should have been defused by CRÜE's manager at the time, Doug Thaler. When Neil's departure was announced a short time later, the reason CRÜE gave for his dismissal was that Neil's motor racing had "become a priority" in his life. "His bandmates felt he didn't share their determination and passion for music," they said in a statement.

After viewing "Breaking The Band", Vince took to his Instagram to write: "Breaking the band, fucking memories from a manager Doug Thaler who can't remember that he's the one who actually broke up the band! The band didn't break up because of me racing. It broke up because he was too much of a pussy who didn't just say, 'Hey guys, let's take a week off and come back with cooler heads.' He called me an hour later and said I was out of the band! Great management!"

Neil continued: "What he didn't say was, instead of me going racing I put out a top 10 single with 'You're Invited' — oops he forgot! Then an album called 'Exposed' — oops, forgot again! No wonder he was fired shortly after."

Sixx tweeted his disapproval over the Reelz episode, writing: "Breaking the Band was not authorized by MÖTLEY CRÜE. Our lawyers sent them a cease-and-desist and further action will be taken. @ReelzChannel Is the bottom of the barrel." He added in a separate tweet: "Should @ReelzChannel be liable for putting out shows without so many artist approval? I am very disappointed that they think they can tell our LIFE story just to sell advertising ( mostly incorrect ) and without any bodies permission."