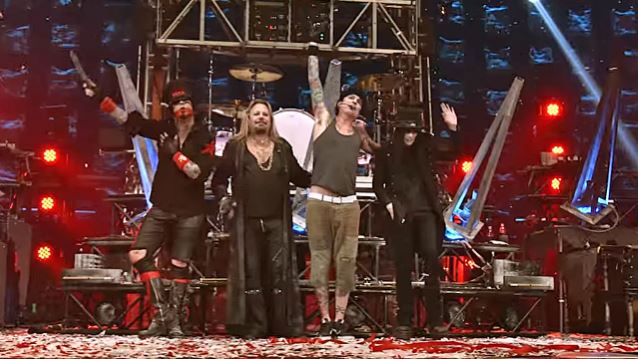 MÖTLEY CRÜE has been sued by photographers Neil Zlozower and Barry Levine over photographs the duo took of the band three decades ago, claiming CRÜE never got their permission to use the photos on merchandise in connection with the group's "The Final Tour".

"In January 2014, MÖTLEY announced that they will be touring for the very last time before their retirement during their Final Tour. The Final Tour started on July 2, 2014 and ended on December 31, 2015.

"On the information and belief, The Final Tour consisted of one-hundred and thirty concerts around the United States, sixteen shows in Europe, five shows in Asia, six shows in Australia region, and one in South America.

"Upon information and belief, in 2014, Motley, Motley Touring, Global Inc., Global Ltd., Live Worldwide, Live Concerts, Live Entertainment, and Live Merchandise copied the Zlozower Photographs and Levine Photographs and placed them on merchandise to sell to the public.

"Upon information and belief, the merchandise was sold on their websites, at
concert venues, and third-party merchandise websites.

Zlozower and Levine are seeking profits from the sale of the merchandise featuring their photographs, as well as damages and attorney's fees.