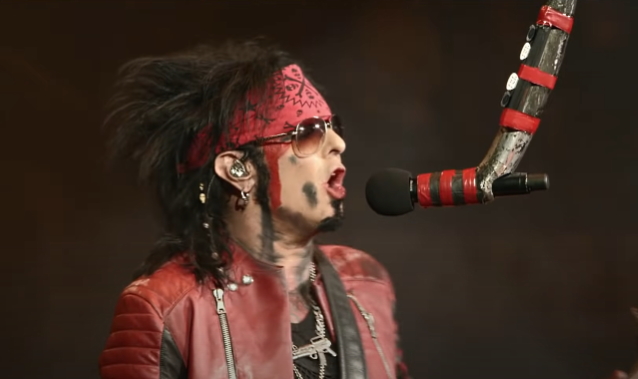 MÖTLEY CRÜE bassist Nikki Sixx, who contributed lead vocals to the band's song "Rocketship" and provided additional singing to "Find Myself", was asked in a new interview with the "My Mom's Basement" podcast if he has ever considered launching a project where he was also the frontman. He responded (as transcribed by BLABBERMOUTH.NET): "Before the pandemic, I got into this lesson thing. So I started guitar lessons online. I just pluck away on the guitar, and I can write an okay song on the guitar, but I don't know a lot about the instrument other than I like to write from root notes — a so, simple chords and all the [sus guitar chords] and all the interchangeable notes that work within that chord, I don't have a ton of knowledge; I can kind of figure it out. So I started taking guitar lessons online and then eventually in person. I started taking bass lessons online and eventually in person. Then I was pushing myself to play with my fingers. So even the songs on [CRÜE's] 'The Dirt' soundtrack — all those songs I played with my fingers. [It was my] first time, and there were some adjustments with the audio, because I'm an aggressive pick player… And then I said, 'While I'm at it, why don't I just take vocal lessons, so I'll be a better background singer? And when I'm writing songs, it'll be easier to explain to the actual singer or whoever I'm co-writing with.' And I was surprised at the range that I had, but it was a little bit in the lower register. But I like to sing more of a falsetto-y thing, like with 'Rocketship', which kind of leans on Marc Bolan.

"I just got to this place where I was just, like, 'I don't have enough years [under my belt as a singer]," he explained. "I don't have a lot of control over my voice. So I'm, like, you know, I seem to have been able to sell over a hundred million records with this crackly old thing I've got now, so I know of let that go for some reason. I might have just gotten busy. That would have all gone bye-bye with the pandemic anyway.

"I don't think of myself as a singer, but I'll do background vocals. And what I learned about my voice is if I'm in the right key, I actually have some strength. So certain songs, like 'Too Fast For Love', the background vocals is perfect for me — it's kind of a shout; there's a melody in there a little bit, but it's pretty punk rock. There's no problems in there at all. Other songs, like 'Girls Girls Girls', it's harder for me to hit some of those notes. So, yeah, there are things you learn about, and there are things you decide, like, 'Is that an important thing for me right now?'

"I will never be a solo artist," Nikki added. "I don't wanna be a solo artist. I'm not interested [in being] a solo artist. I'm a bandmember and project person, and the idea of putting out a solo record where I'm singing." He then seemingly corrected himself. "I guess maybe — never say never — maybe someday maybe I'll wanna do something like that," he said.

"Rocketship" and "Find Myself" both appeared on CRÜE's 1997 album "Generation Swine", which marked the return of lead singer Vince Neil.

Sixx's new book, "The First 21: How I Became Nikki Sixx", looks back at his formative years beginning with his birth in 1958 as Franklin Carlton Feranna to the date in 1980 — before the band was formed — when he legally rechristened himself Nikki Sixx. Written with Alex Abramovich, the new memoir was released October 19 and quickly shot to No. 1 on Amazon's rock music books chart. It is also in the Top 40 of Amazon's overall biographies and memoirs chart.