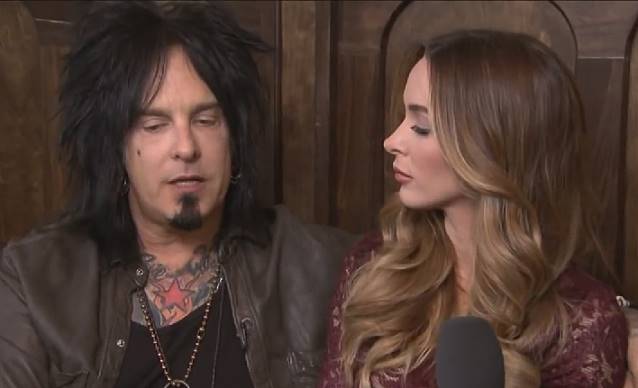 Courtney Bingham, the 28-year-old wife of MÖTLEY CRÜE bassist Nikki Sixx, tells Radar Online that they are planning to have a baby, which will be the first child for her.

"Something great is coming to an end but new things are around the corner," Bingham said. "When the [current MÖTLEY CRÜE] tour is over, we intend to have a little rocker of our own! I am so excited to have my first baby with the love of my life."

"Married life is everything I dreamed it would be," Courtney said. "I still wake up and pinch myself every day when I see my husband. He then surprises me with lovely flowers and shows me the appreciation that anyone would want from a true gentleman. I am literally living my dream."

This is the third marriage for Sixx, who has three kids with ex-wife Brandi Brandt: Storm Breanne Sixx, 20, Gunner Nicholas Sixx, 23, and Decker Nilsson Sixx, 19. He also has a daughter with his ex-wife, "Baywatch" star Donna D'Errico, Frankie-Jean Mary Sixx, 13.

Sixx and Bingham had been dating since 2010, shortly after the breakup of his relationship with tattoo artist Kat Von D.