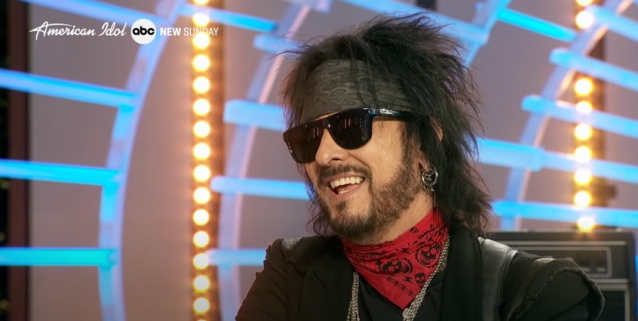 MÖTLEY CRÜE bassist Nikki Sixx will make a guest appearance on this Sunday's (March 20) episode of "American Idol". The episode will feature auditions on Los Angeles's iconic Sunset Strip where CRÜE got its start during the 1980s.

In a statement to Billboard, Sixx said: "It was a lot of fun to team up with 'American Idol' upon the show's return to L.A. After all, MÖTLEY CRÜE are also from L.A., and so many amazing songwriters call Los Angeles their 'Home Sweet Home'.

"Because of 'American Idol', a lot of great, timeless, classic songs have not only been re-interpreted by the next generation of talented singers but have also been re-introduced to mainstream audiences and younger generations of music fans for the last two decades," he continued. "As a songwriter myself, that's something I really appreciate, so when I was invited to appear on this Sunday's episode, I did not hesitate."

In the sneak peek video, judges Katy Perry, Lionel Richie and Luke Bryan drive up in a convertible on the Sunset Strip. Richie says he wants to see this season's contestants "walking in the footsteps of major giants." At that point, Sixx can be seen playing CRÜE's song "Home Sweet Home" as the judges enter the audition room.

"If anybody wants to hear about the stories of the Sunset Strip…" Richie says, pointing at Sixx, who replies, "Don't come to me."

In the latest episode of auditions for the season, Bryan, Perry and Richie continue to look for America's next singing sensation in Los Angeles, Austin, and Nashville.

After a two-year hiatus and switch in networks, "American Idol" returned in 2018 with a new set of judges, including Perry, Bryan and Richie.

"American Idol" started out on Fox, where it had a home up until season 15, then made a comeback thanks to ABC for season 16.