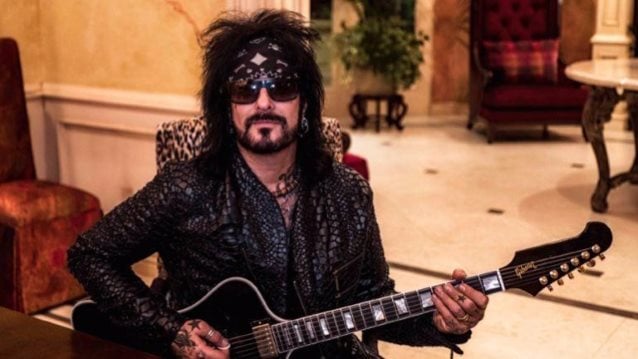 MÖTLEY CRÜE bassist Nikki Sixx is among the artists who will speak at "Song Stories: Bowie", an intimate event honoring David Bowie's work and legacy, as told through the powerful stories of artists and fans alike. Set to take place on December 5 at the Sonos Store in New York, it will lend a voice to creators inspired and influenced by Bowie, and give fans the opportunity to hear their original stories paired with the songs that best accompany them.

The New York edition of "Sonos Song Stories: Bowie" is a continuation of a series of chats that kicked off at the recently opened Sonos Store in the Seven Dials neighborhood of London, England. The inaugural event, hosted by Miranda Sawyer on November 15 and 17, featured rarely seen images of Bowie's London life captured by Mick Rock, Brian Duffy, Rolf Adlercreutz and Mike Maloney; the evening also included powerful, Bowie-inspired memories and stories as told by Nick Rhodes, Goldie, Graham Coxon, Carl Barat, Peaches and Rostam.

"Sonos Song Stories: Bowie" is a free event and fans can register for a chance to hear these never-before shared stories in New York City at this location.

Bowie was modern music's most unrelenting innovator, whose singular sound and vision impacted generations and continues to play a vital role in shaping the musical landscape of New York and the world.

"Song Stories: Bowie" will utilize the new Sonos One with Amazon Alexa to pair the stories of the speakers with the Bowie songs that inspired them.

After Bowie died in January 2016, Sixx paid tribute to the British art-rock icon, saying: "Bowie not only inspired me as a songwriter but inspired me to add layers to my creativity as an artist.

"People are meant to evolve. It's a natural part of life, but so many artists become stagnant," he continued. "Bowie showed us that it's not only important to evolve as artists but mandatory. Funny thing is what David was doing all along was teaching us to expect more from ourselves and never settle for less that extraordinary. Proving all along he was the teacher and we were all just his students. He taught us well.

"Bowie was my hero and always will be."

Sonos Song Stories: Bowie is a free event at Sonos in Soho, NY, celebrating David Bowie as told through powerful tales of artists and fans alike on Tuesday, December 5. Fans can register for a chance to hear never-before shared stories in New York City at: https://t.co/aDBOmiuGMLpic.twitter.com/JoRcT7IhXi