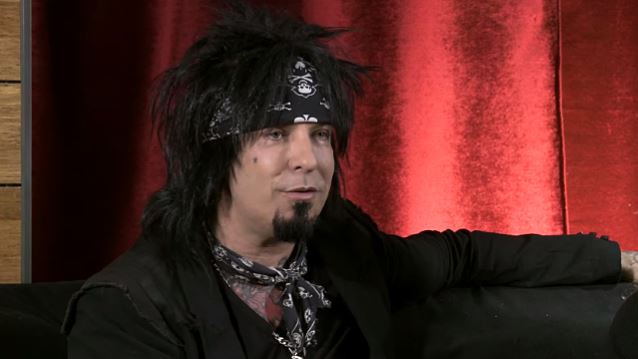 MÖTLEY CRÜE bassist Nikki Sixx says that if his band was ever honored into the Rock And Roll Hall Of Fame, he would decline the nomination, explaining that the Rock Hall "has lost touch with art, songwriting craft, lyrics and influential music."

Despite the fact that artists are eligible for the Rock And Roll Hall Of Fame 25 years after the release of their first album or single, iconic hard rock and metal bands like MÖTLEY CRÜE (which has been eligible since 2006),DEEP PURPLE, IRON MAIDEN and JUDAS PRIEST have yet to be recognized by the institution, which inducted GUNS N' ROSES in that group's first year of eligibility.

Writing on his Facebook page earlier today, Sixx said: "The only award I look forward to getting is the one I will probably decline and that's the Rock And Roll Hall Of Fame. It's a fixed old-boy network that has lost touch with art, songwriting craft, lyrics and influential music and usually has other agendas at hand. Young bands tell me it's a joke, and these bands are the future."

VH1 Classic "That Metal Show" co-host Eddie Trunk echoed Sixx's sentiments, telling the New York Daily News last month: "How can you have a Hall Of Fame where it takes KISS, RUSH and Alice Cooper twenty years to get in, but GREEN DAY and GUNS N' ROSES go in on first ballot but it DEEP PURPLE doesn't get in."

DEEP PURPLE, which has been eligible for induction into the Rock And Roll Hall Of Fame for two decades now , was denied entry to the Rock Hall in 2013 — losing out to such artists as American pop singer-songwriter Randy Newman and R&B singer Donna Summer.

KISS, which was passed over by the Hall since 1998 before finally getting the nod this past April, took its long-overdue induction with a grain of salt, with frontman Paul Stanley telling Classic Rock that it felt like a case of a little too little and a little too late to mean anything for him, explaining, "It was done begrudgingly and because it had become absolutely ludicrous that they were choosing to ignore us. At the end of the day, most people don't realize that the Rock And Roll Hall Of Fame was a privately created establishment and that it has a self-appointed board. It's a perfect case of perception becoming reality. People heard 'Rock And Roll Hall Of Fame' and gave it credibility."

He went on to say: "So whether it deserves the title has to be weighed against who it inducts. So was it an honor to be nominated? No. It means a lot to the fans and I understand it because it's validation for them. So for that reason I accept graciously and accept on their behalf."