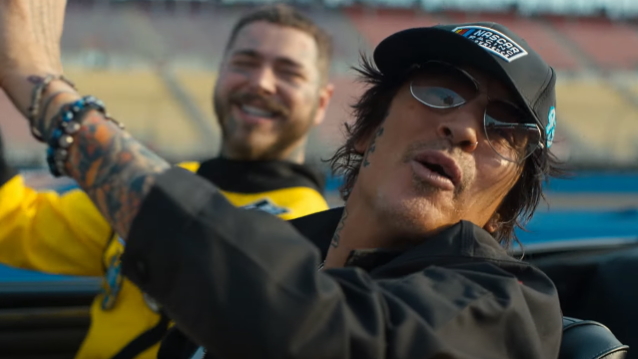 "Motley Crew" is his first new original music of the year — the lead track from a companion project to a forthcoming documentary, coming soon. Once again, he delivers the perfect anthem to rage to, living up to the title of "Motley Crew" like only Post can.

Lee is no stranger to interesting collaborations, including a previous appearance on Tyla Yaweh's single "Tommy Lee", alongside Post Malone.

Tommy's latest album "Andro", released via Better Noise Music in 2020, is a testament to the depth and variety of his musical taste. Lee spent two years writing and recording "Andro" and the record truly represents the music that he was meant to make — and reveals the depth and range of his musical fascinations. The album also symbolizes the male and female sides of music — equally important and equally powerful — thus the LP's title. Androgyny is a combination of the essences of male and female genders and the album is the manifestation of the concept.

Last year, Lee said that he was thrilled to be the inspiration for Tyla Yaweh's "Tommy Lee". The track, which was released in June 2020, is said to be an ode to the MÖTLEY CRÜE drummer and his lavish lifestyle.

"It's even hard to explain," Tommy told Kyle Meredith in an interview. "I'm honored to death that someone would even call a song 'Tommy Lee', and then to have a song be about you… And coming from guys that, like — fucking Post Malone is probably one of the biggest artists, other than Billie Eilish. These are extremely talented and successful artists, and to get that back, it's hard to even explain. It feels so cool. It's like you're in a club. They've not only accepted you, they're fucking honoring you.

"It's hard to talk about myself like that, so it's difficult; I'm sorry," he continued. "But it's cool because it just acknowledges that what I'm doing, I'm on the right path. Getting shoutouts from a bunch of other hip-hop artists, and my name pops up in a bunch of songs. I get a kick out of that. I'm, like, 'That's fucking rad, man.' It's weird even talking about it. I don't know. [Laughs]"

Lee and Post Malone previously collaborated on the song "Over Now", which was featured on the rapper's 2018 album "Beerbongs & Bentleys".

Lee told Debatable about Malone: "I've known him for a while and that dude is a rock star, let me tell you. He's a freaking maniac."

Tyla told NME that "Tommy Lee" is about "living life and spreading positive energy." Explaining why he and Malone named the track after the MÖTLEY CRÜE drummer, he added: "Tommy Lee just doesn't give a fuck and I love that."