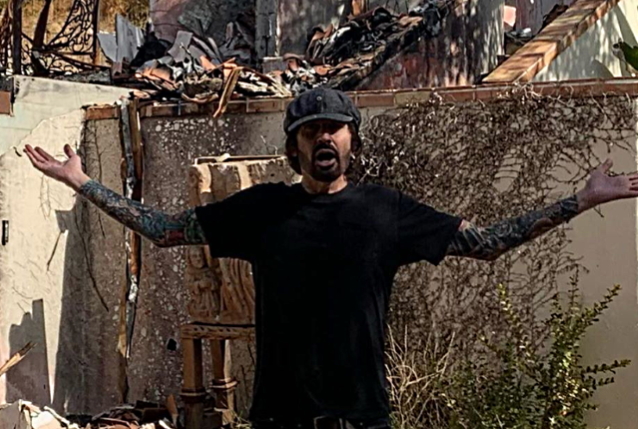 The Malibu home MÖTLEY CRÜE drummer Tommy Lee proudly played docent for in a classic 2000 episode of "MTV Cribs" has apparently been completely destroyed in the recent California wildfires.

On Friday, Lee took to his Instagram to post several photos and a video of the former six-bedroom, six-bathroom house built in 1991, along with the caption: "Don't know who seen my old Malibu home on @mtv mtv_cribs here's what's left of it after the fires"

The Spanish villa-style home was reportedly built for Lee and his then-wife, actress Pamela Anderson, and was later owned by BOYS DON'T CRY frontman Nick Richards.

According to a February 2018 Los Angeles Times article, the estate had been shopped on and off since Richards sold the property in 2015 for $2.2 million.

In the aforementioned "MTV Cribs" episode, Tommy could be seen highlighting certain areas of the house such as the disco in the basement and the tropical-themed swimming pool and bragging about unique features likes his own professionally installed Starbucks cappuccino machine and a sex swing in his bedroom.

Lee married his fourth wife, Brittany Furlan, in February. The pair started dating and fell in love in 2017.