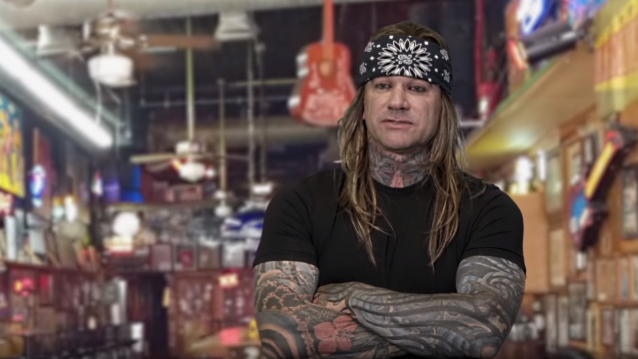 STEEL PANTHER drummer Stix Zadinia has asked Mick Mars for tickets to MÖTLEY CRÜE's upcoming reunion tour after a five-year-old video surfaced of the guitarist promising everyone "free" entry to the show.

In a newly posted clip from a 2014 episode of the now-defunct "That Metal Show", Mars is asked about the possibility of the CRÜE reuniting for more tours after promising that its 2014/2015 farewell run is really its last. Mars replies: "Let me put it this way: If that happens, I will invite the world to come for free."

On Friday (November 22),Zadinia — whose real name Darren Leader — took to his Twitter to write: "Seriously, Mick Mars offered free tickets to the world. Mick, can you put @Steel_Panther on the list? What time do you start? Where do I go? Will call? Do I get to see you before the show? Wanna go out afterwards? My friend has a strip bar near the venue!!!!!"

But nearly four years after that last show, the band posted a video explaining that due to the group "becoming more popular than ever" and "gaining an entirely new legion of fans" in the four years they've been off the road, the CRÜE is coming out of retirement. They will reportedly embark on a stadium tour with DEF LEPPARD and POISON in 2020, but that has yet to be officially confirmed.

STEEL PANTHER singer Michael Starr recently told The Front Row Report that he "knew" MÖTLEY CRÜE would eventually reunite. "I knew right when they signed it six years ago that this was going to happen down the road," he said. "It's just the way it is. They are too iconic of a band just to go away and never play again. Even when I heard the news [they were calling it quits], I was, like, 'Really? Don't do that. That sucks.' I would understand taking a break, but… I don't know, man. I'm not in their position. They've been rocking big time for 30, 40 years.

"I've gotta be honest with you, man," he continued. "I'm glad that they're coming back. And I'm glad they're touring with DEF and POISON. It's gonna be an epic tour that will get everyone excited about rock and roll and heavy metal again. And it's important. That's what we are trying to do."

After news of STEEL PANTHER's comments made the rounds, MÖTLEY CRÜE bassist Nikki Sixx tweeted: "The singer in Steal Panther [sic] can go fuck himself … wanna-be band putting down Vince Neil?" One fan then pointed out that STEEL PANTHER sometimes plays MÖTLEY CRÜE songs during its concerts, to which Sixx replied, "That's why they are assholes. Backstabbers."

Back in 2014, Sixx told Rolling Stone about the chances of a CRÜE reunion: "There are people in this band who will refuse to ever do it again, and you're talking to one of them. There is no amount of money that would ever make me do it again because I have such pride in how we're ending it."

Seriously, Mick Mars offered free tickets to the world. Mick, can you put @Steel_Panther on the list? What time do you start? Where do I go? Will call? Do I get to see you before the show? Wanna go out afterwards? My friend has a strip bar near the venue!!!!!😬