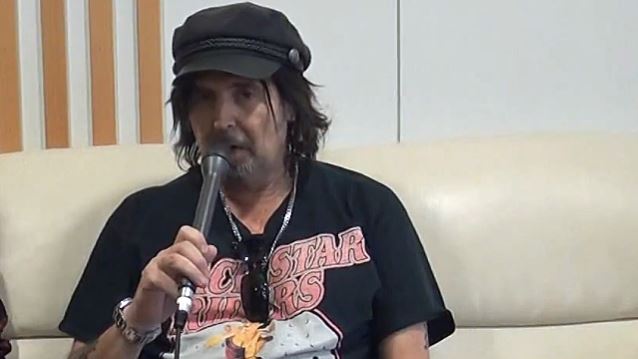 On August 5, Kaaos TV conducted an interview with MOTÖRHEAD guitarist Phil Campbell and the singer of PHIL CAMPBELL AND THE BASTARD SONS (formerly PHIL CAMPBELL'S ALL STARR BAND),Neil Starr, at Vauhtiajot in Seinäjoki, Finland. You can now watch the chat below. A few excerpts follow (transcribed by BLABBERMOUTH.NET).

On whether it's emotional for Phil to perform MOTÖRHEAD songs with PHIL CAMPBELL AND THE BASTARD SONS:

Phil: "Actually, it's not so bad. I just feel like it's… I get emotional when I'm not playing, when I'm thinking about… I get more emotional when I see photographs of Lem [late MOTÖRHEAD frontman Lemmy] and stuff. [When I am performing live], I'm concentrating too hard, really, to have that much emotion with them. But it's great to play the songs, 'cause some of them are songs that we haven't played with MOTORHEAD for years; they're quite obscure. So it's a lot of fun."

On the status of the PHIL CAMPBELL AND THE BASTARD SONS debut EP:

Neil: "We just finishing off vocals. Everything else is done. So we have two more songs left for me to sing and then we'll send it off to get mixed. We're hoping for an October/November release, if we can. We don't wanna leave it too long. The reason it's an EP is we can get that done quicker. We wanted to give people some music to hear that was our own music, some music of our own that we can play live as well. So the idea was to get something done as quick as possible, so I hope we can release it before the end of this year. It keeps the fans interested in the band, because there's new songs to keep it fresh. And it's great for us, 'cause we get to write more songs all the time. Todd, who's in the band, has his own recording studio, so it's really easy for us to just go in and do what we wanna do whenever we want, which is great."

On the musical direction of PHIL CAMPBELL AND THE BASTARD SONS' original material:

Phil: "I don't know what they can expect. They just have to wait and listen. That's all."

Neil: "You know what you're gonna get, because Phil Campbell is the riff god. So you hear these MOTÖRHEAD riffs; Phil wrote a lot of those songs. So there's elements of that gonna be coming through in the music. Obviously, personally, I wouldn't ever want to try and be like Lemmy and his style that he does, because that's one person who does that, and that's him. You don't try and do that. I bring my own style to the band, but, obviously, yeah, there's lots of really great riffs in the songs, like you would expect from a band that's got Phil Campbell in it. It's just rock and roll music, I guess."

Phil: "It's gonna be done when they're done. At the moment, we've been concentrating on the [PHIL CAMPBELL AND THE BASTARD SONS] EP. And the solo record, in a couple of weeks, I'll start on that again. It's coming slowly. Neil's gonna be on some tracks and everything. And the book will be put on hold. [Work on] the book will [resume] next year, probably. I've started it, but it's just… [I've] been pretty busy all the time, so I can't do it all in one go."

On whether Chris Fehn (SLIPKNOT) and Rob Halford (JUDAS PRIEST) will appear on Phil's solo album:

Phil: "Yeah, [there will be] quite a few [guests]. I probably write the songs, and then, if somebody springs to mind, I give them a call. Whitfield Crane [from UGLY KID JOE] is gonna be singing on some as well, hopefully, and I've got [Joe] Satriani working on one. And we'll see how it goes. So there'll be a handful of guests.

PHIL CAMPBELL AND THE BASTARD SONS features Phil alongside his three sons: Todd, his eldest, and Dane from STRAIGHT LINES; and Tyler from THE PEOPLE THE POET.

PHIL CAMPBELL AND THE BASTARD SONS' setlist is full of classic MOTÖRHEAD songs infused with covers of some of Phil's favorite bands, including BLACK SABBATH.

Phil Campbell was the lead guitarist in MOTÖRHEAD for more than 30 years.