"It's going to be great to come back and see all our Swedish fans," said SAXON frontman Biff Byford in a statement. "This event is something special and unique. We have never before played a concert at a racetrack on a raceday and it will also be a chance to pay tribute to our longtime friend and rock icon Lemmy along with Mikkey Dee and Phil Campbell."

Added Dee: "This is going to be a night to remember! Playing some of MOTÖRHEAD's greatest hits together with our friends SAXON is going to be a great tribute to our former friend and bandmember. The Lemmy 500 will go down in history as the rockiest race championship final ever!"

The Swedish national championship racing series V8 Thunder Cars renamed its final race in honor of Lemmy. The winner of the Lemmy 500 and the championship will be crowned on stage before the concert starts.

"There will be no other race more prestigious to win than the Lemmy 500 in Sweden," said Alexander Graff, runner-up in the championship last year and one of the favorites for the title this year. "It will be one hell of a final, a true party of rock 'n' roll and racing mixed together. Both SAXON and MOTÖRHEAD are huge here in Sweden and we will make sure the spectators will feel right at home in our paddock. We are quite a rowdy but friendly bunch and definitely more rock 'n' roll than the glamour that is so often associated with motorsports."

Tickets will go on sale in May via Ticketmaster.se. 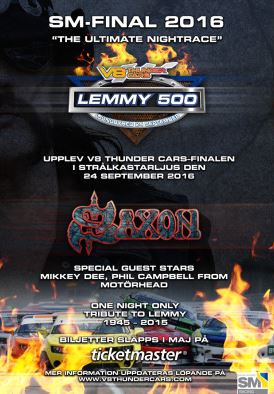