MOTÖRHEAD has released a new animated lyric video for a previously unreleased live version of "Shoot You In The Back", recorded in Orleans in 1981. The full concert is available as part of the "Ace Of Spades" 40th-anniversary box set.

Upon its release in 1980, MOTÖRHEAD's "Ace Of Spades" album was nothing short of a gamechanger for all forms of hard rock. Like lightning in a bottle, it perfectly captured everything great about hard rock, heavy metal, and punk, amped it all up to 11, and came racing out of the gates at what felt like a million miles an hour, pushing at every musical boundary. Nothing was harder. Nothing was faster. And certainly nothing was louder.

Now, following on from last year's fan and media acclaimed anniversary editions of the seminal "Overkill" and "Bomber" albums, comes the record that launched MOTÖRHEAD into the stratosphere and carved their name into the walls of rock n'roll history forever: "Ace Of Spades". To celebrate the 40th anniversary of this milestone album, it is being presented in new deluxe editions on October 30. There will be hardback book-packs in two CD and triple LP formats, featuring a previously unheard concert from the "Ace Up Your Sleeve" tour, the story of the album and many previously unseen photos. Also, the album will be released as an ultimate fan, collector edition "Ace Of Spades" box set, containing a bevvy of era-specific treasures and some 42 previously unreleased tracks.

* The "Ace Of Spades" album, half-speed mastered and created from the original master tapes.
* Two double live albums of previously unheard concerts from the "Ace Up Your Sleeve" tour.
* "A Fistful Of Instrumentals": A 10" EP of previously unreleased, instrumental tracks from 1980.
* "The Good, The Broke & The Ugly": A double album of B-sides, outtakes and rare tracks.
* "Ace On Your Screens": A DVD compilation of rare TV appearances from 1980-81, a live concert from 1981 and a 5.1 audio mix of the original album.
* The "Ace Of Spades" story. A 40-page book telling the story of "Ace Of Spades" through previously unpublished interviews with the people that were there. Includes never before seen photos and memorabilia.
* The "Ace Up Your Sleeve" tour program
* The MOTÖRHEAD Rock Commando comic.
* A set of 5 poker dice that can be played on the game board inside the box set lid.
* All encased in a classic Wild West dynamite box.
* A limited edition 7" reproduction of the Dutch "Ace Of Spades", with a previously unreleased instrumental version on Side B. (while stocks last!)

The Good, The Broke & The Ugly

"Ace On Your Screens" DVD 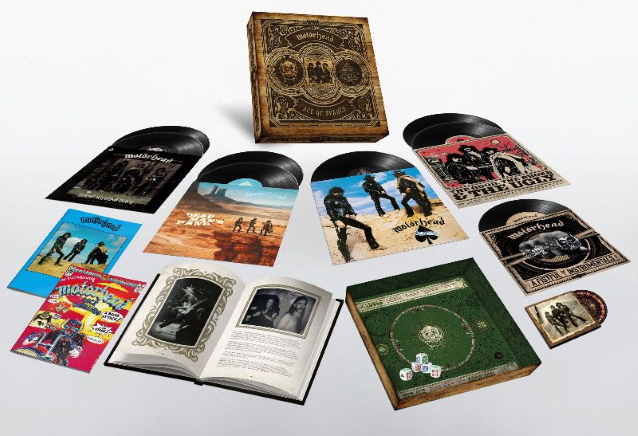