MOTÖRHEAD's MIKKEY DEE: 'LEMMY Told Me He'd Fire Me If I Tried Drugs'

The February issue of Sweden Rock Magazine is dedicated to iconic MOTÖRHEAD frontman Ian "Lemmy" Kilmister, who died in December at the age of 70. In addition to receiving a MOTÖRHEAD t-shirt, new subscribers of the magazine can read stories about the legendary musician as told by his friends, crew and fellow musicians over 39 pages.

A month after Lemmy passed away, Sweden Rock Magazine met drummer Mikkey Dee in his hometown of Gothenburg, Sweden to discuss the death of his bandmate and friend and Mikkey's plans for the future. Excerpts from the in-depth interview (6,400 words over nine pages) — translated exclusively for BLABBERMOUTH.NET — follow below.

On what affected him the most during Lemmy's memorial service:

Mikkey: "Seeing Lemmy's empty boots up there. In the middle they'd placed some pictures and his hat, but just seeing his boots standing there. Empty. I know how much his boots meant to him. He was wearing them all the time. He didn't feel comfortable if he wasn't wearing his boots. And there they were, empty, and then it all hit me… That was really hard to look at. Then, of course, it was hard listening to the speeches. A lot of people broke down crying. Dave Grohl had a hard time [not crying]. It was almost a good thing Phil [Campbell, MOTÖRHEAD guitarist] wasn't there — he probably wouldn't have be able to handle it."

On whether Lemmy continued using speed until his death:

Mikkey: "I don't know if I want to sit here and say what he was and wasn't doing. I can say this: he quit doing everything for quite a long while, because he was actually shocked when he became ill [in 2013]. I just know that he told me: 'The day you try drugs, you're fucking fired.' [Laughs] I've never tried drugs. I drink my beer, but he made sure that I would never try drugs. If I'd done that, the whole thing would've crashed."

On arguing with Lemmy:

Mikkey: "Many years ago, I replaced his regular Coke in the dressing room with Cola Zero and Diet Coke. I told the crew not to give him regular Coke. Lemmy thought it was a fucking drag when I interfered like that, but what was I supposed to do? During that period, he was careless with his diabetes in a way that was… I went through the same thing with my father, so I know how important that was. I said: 'It won't be long until they cut both your legs off and then you'll be sitting in a wheelchair.'"

On whether a Lemmy tribute show with Mikkey Dee, Phil Campbell and "Fast" Eddie Clarke could happen:

Mikkey: "Yes, something like that is definitely happening, but when and how I have no idea. All this has to settle first and now is not the right time to do something like that. Personally, I'd like to wait a little until there's a demand. The fans have been eating hamburgers for 40 years, so then maybe you don't want to have a hamburger the first year after Lemmy's death — instead you have to crave that hamburger again. That's how I look at our music: we have toured for so many years that some time has to pass until people say 'Fuck, I'd really like to hear some cool MOTÖRHEAD songs live on stage again.' Personally, I don't think it was appropriate that DIO DISCIPLES were out touring six months after Ronnie James Dio's death. It wasn't at all appropriate, for several reasons. I want there to be a demand for MOTÖRHEAD first, then maybe something will happen with me and Phil and maybe Fast Eddie plus two or three other megastars that love MOTÖRHEAD. If that's the case, I believe you can do something really great with it, but it's all about the right place at the right time."

Mikkey: "I don't know about that. He's got Matt Thompson, who is great and has played in the band for a really long time, so that's up to King. I think it would be a lot of fun to play with KING DIAMOND again. It would be great, but I'm not going to talk my way into the band. That's something they have to decide on. When I played in MOTÖRHEAD, there was a lot of pressure on Lemmy to bring back both Phil Taylor and Fast Eddie again. Lemmy wouldn't even listen to all that [talk]."

The Lemmy issue of Sweden Rock Magazine will hit newsstands in Sweden on February 23. 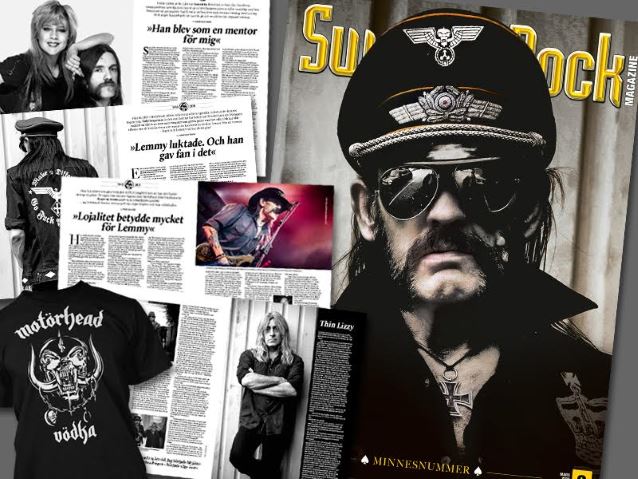