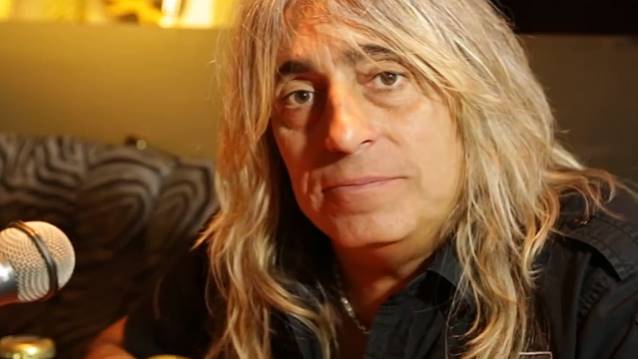 MOTÖRHEAD's MIKKEY DEE: 'Pretty Much Everything Was Unique With LEMMY'

MOTÖRHEAD drummer Mikkey Dee was interviewed by Red Carpet News TV at the Metal Hammer Golden Gods, which took place June 13 at the Eventim Apollo in Hammersmith, London, England. You can now watch the chat below.

Speaking about iconic MOTÖRHEAD frontman Ian "Lemmy" Kilmister, who passed away last December at the age of 70, Dee said: "Pretty much everything was unique with Lemmy. A lot of people saw him as a bass-player-slash-guitar-player, but to play with this man, he was extremely good. He was so heavy, so unique, and he had a certain way of bending notes and getting into breakdowns in music. He was very, very hard to play with in the beginning, but once we got together and we locked in, after a few years, he was a tremendous bass player and a singer. He was so unique. You can't really put a finger on what exactly made Lemmy, Lemmy, and that's what made him unique. It's easier to say… Some other musicians, you can say, 'Well, that guy or that girl, she's amazing on scales or chops on drums,' or whatever. Lemmy, he was just a very, very unique man in all ways, shapes and forms. And I don't know what to say more about that. You can't explain it. Why does something taste so good? Why?"

Dee also talked about the way MOTÖRHEAD's career came to an abrupt halt with Lemmy's death. "I think we went out with a bang, a big crash — a fantastic way of finishing off the band," he said. "I couldn't believe that Lemmy actually could play, knowing that… Well, you know, we struggled on the [last] European tour, but when he walked on stage, he was unbelievably good. And then he suffered from energy loss. But no one thought he was gonna pass away."

He continued: "Well, he's up there, he's down here somewhere, just laughing, and I kept saying every snare hit I do from now on until the end of my career will be a small tribute to Lemmy there — the man and friend and bandmate that I had."