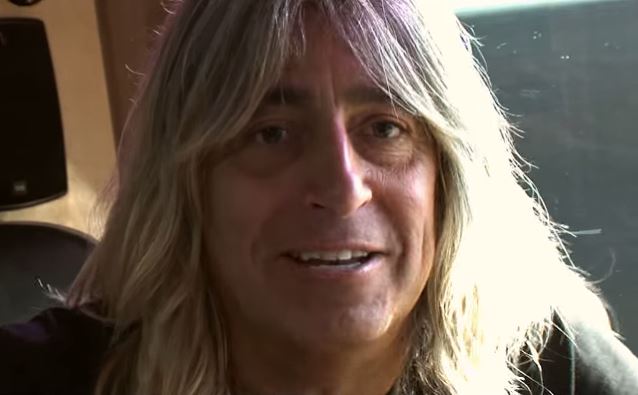 MOTÖRHEAD drummer Mikkey Dee was interviewed by rock journalist Mitch Lafon for a recent edition of the "One On One With Mitch Lafon" podcast (Facebook page). You can now listen to the chat using the Spreaker widget below.

Speaking about MOTÖRHEAD frontman Lemmy Kilmister's health, Mikkey said: "You never know with health, but he's fighting, and he's doing much, much better. [Editor's note: The interview was conducted prior to the cancelation of MOTÖRHEAD's concerts in Salt Lake City and Denver.] I mean, this year we've been really kicking ass all over the world. I did not think that we would do this much touring as we have been doing. So it's a positive thing, and it's been a very hectic schedule. But you never know. I mean, sometimes we're all a bit tired of… This year has been a lot of travel, actually. It's been a lot of work, because we did the [new MOTÖRHEAD album, 'Bad Magic'] from January on, and it's been a constant travel, actually. Maybe not most of the shows, but we've been travelling a lot. But he's doing fine. He's in good spirits."

Asked about the status of his own health, Mikkey said: "I'm playing better than ever. That's how I'm feeling. Absolutely. I mean, I don't have any issues with my back or elbows or shoulders or wrists or anything so far. Knock on wood, I have to say, but so far so good. Then it's fun to tour and it's fun to play, when you can actually do it easily. And I feel that I'm playing very, very well right now. So that's good."

Regarding why MOTÖRHEAD continues to make new music when it could easily spend all its time playing the classics on the road, Mikkey said: "We don't have to [make new music], but… It's not so much 'have to do it or not do it.' It's a creative part of the whole band that we like to… You like to do it simply. I mean, we all like to write. Me and Phil [Cambell, guitar], we love to write new songs. And it's always a challenge to do it. And we are picking up new generations [of fans] all the time, and it's very important for us to move forward. We can't just play all the older stuff. We really like to play new stuff as well. So it's a challenge for us."