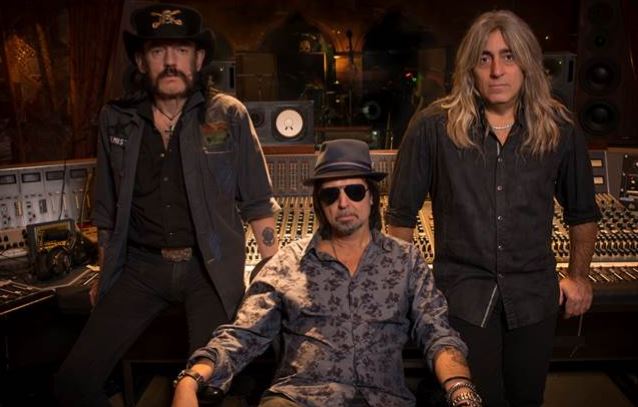 MOTÖRHEAD is currently in the studio with longtime producer Cameron Webb working on the band's upcoming album, due out this fall. The revered trio will support the FOO FIGHTERS on tour this July in Japan and Korea (including a stop at the longest-standing music fest in Japan, the Fuji Rock festival on July 24, and the Ansan Valley Rock Festival in South Korea on July 26) in addition to planning a U.S. tour in late summer 2015. Additionally, the band will set sail on the MOTÖRHEAD Motörboat cruise in late September.

Celebrating their 40th anniversary as rock and roll's undisputed rebels, MOTÖRHEAD will appear on this weekend's edition of VH1 Classic's "That Metal Show". The show will air this Saturday, March 7 at 9 p.m./8 p.m. Central, and feature Lemmy, Phil Campbell and Mikkey Dee of MOTÖRHEAD as the honored Metal Modem guests via remote video.

MOTÖRHEAD's song "Heartbreaker" was nominated in the "Best Metal Performance" category at this year's Grammy Awards.

MOTÖRHEAD frontman Lemmy Kilmister, 69, in 2013 suffered a haematoma (where blood collects outside of a blood vessel),causing the cancelation of a number of the band's European festival shows. He was also reportedly fitted with a defibrillator because of heart problems.

The reissue of MOTÖRHEAD's 21st studio album, "Aftershock", was made available on August 26, 2014 via UDR/Motörhead Music. The CD was helmed by longtime producer Cameron Webb (MEGADETH, DISTURBED). The expanded edition contains a bonus live CD — also recorded by Webb — consisting of live material comprised from the band's historic appearances in early 2014.